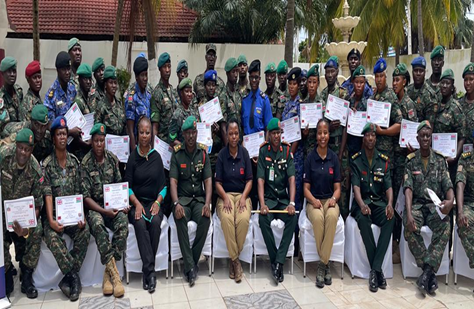 The Gambia Armed Forces (GAF) in collaboration with the British Peace Support Team Africa (BPTS) on Friday 2nd August 2022 concluded a two-week intensive training for 38 security personnel on gender in peace support operations at the Joint Officers Mess in Kotu.

Lieutenant Colonel Lamin K Sanyang, Director of Press and Public Relation Officer of GAF, underscored the significance of the training, saying it is timely and that the knowledge gained will help the beneficiaries in their operations.

The objective was to widen the participants’ understanding on key concepts and issues such as gender in peace support operations.

Dr. Sellah Kimgoro, Senior Gender Advisor Peace Support Team Africa, expressed her profound gratitude to the Gambia Armed Forces and described their commitment during the training as an indication that the sky is not the limit for gender mainstreaming in the military in Gambia.

“The purpose of the course was to identify how gender can be mainstreamed within the various functions of the military, police, or within civilians. It was beneficial to have security men in the training to discuss key gender issues” she added.

Lieutenant Colonel Musa Trawally, who represented the Chief of Defense Staff, underscored the significance of the training saying the primary mission of the military is to preserve and defense of territorial integrity of their countries.

“The missions are not changing but the environment in which we operate as security forces is changing gradually. This training will increase the understanding of the participants in their operations in peacekeeping and also strengthen their relationship with the local population who they are serving.

It will further enhance their ability to respond to certain protection needs of the people and in upholding international standard on fundamental human rights thereby improving their understanding of such situations,” said colonel Trawally.

Sergeant Maimuna John, giving the vote of thanks on behalf of the participants, expressed appreciation to GAF leadership and their partners for giving them the opportunity.

“The course has exposed us to crucial issues and has better prepared us in our military career. During the past two weeks, we have been taught key sensitive areas that are very important in our operation,” she emphasized.