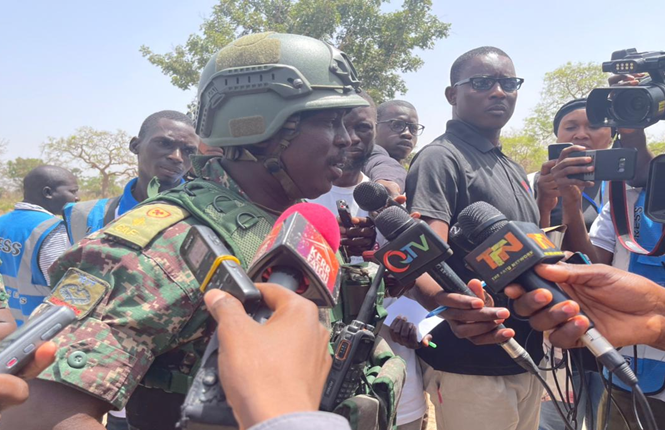 The Gambia Armed Forces under operation ‘Woullah Kokkon’ which seeks to support people in Foni on Saturday 23rd April 2022 conducted a border patrol with journalists to all the border villages in Foni. The purpose was to give journalists the opportunity to gather firsthand information by interacting with the affected families.

Ebrima Bojang, head of Ballen village, said the attack on the MFDC began as the Senegalese Forces allegedly forced their way into Casamance which is less than hundred meters from the village. “Shells were landing in my village. Everyone fled, but I and few others stayed to take care of our livestock and properties. It was a very difficult moment for us. We thank Colonel Bojang and his team for keeping us safe,” he said.

The villagers said the Soldiers have been playing a significant role in keeping them safe, confirming that soldiers always respond to their concerns on time thereby minimize economic loss.

“We sometimes climb and hide in trees to avoid being hit by the landing shells,” villagers told reporters.

Ballen village head Ebrima Bojang added that it is nearly since they last heard explosions in the region, expressing hope that everything would be fine and they would get back to their normal business.

“We are Gambia and we should not be neglected. We are taxpayers and we participate in electing leaders. We need help in any form,” he emphasized.

Farba Nyassi, a woman residing in Baipul Village, disclosed that they are facing many challenges, while calling on government to respond to their urgent needs.

“Life has been extremely difficult for us since we fled our village. Our properties have been stolen and our gardens which is our main source of income have been destroyed,” she lamented.

Modou Badjie, Gifanga Village Alkalo, said the conflict has badly affected them. “Before we were hosting about ten different families in the village, but they all went back because of socioeconomic challenges. The only support we have got from the government is five thousand dalasi per household and many did not even get the money yet.”

Lt. Colonel Bojang said the fight in the region has affected many families, adding that their role as soldiers is to protect the people.

“We always conduct patrol within the border to make sure our territory is safe. When the shells were landing in our territory, we inform the Chief of Defense Staff and he immediately engaged the Senegalese authorities who responded that it was not intentional that shells were landing in the Gambian area. He said sometimes it happened because the weapons can travel for distance.”

“Our children are not going to school as schools are closed because of the situation. We want the soldiers to stay here so that the people can have confidence.”

Colonel Bojang said Upart village registered large number of refugees, noting that the village is less than fifty meters from the border with ‘rebels’ checkpoints. He said they have been working under difficult moments to ensure the people are safe.

Ousman Sonko, village imam said they have been undergoing numerous challenges, adding that accommodation has become their major problem. He called on government and philanthropists to support them. He also confirmed that his village is yet to receive any support from the government.

The team ended its visit in Kafuta where Colonel Bojang who led QRF 1 handed over responsibilities to Lt. Colonel Abdoulie Jatta who will be leading QRF 3 patrol team in the border. Colonel Jatta says he will lead the QRF 3 to make sure that the people are safe and thanked QRF 1 team for a job well done.

“We are taking over operations and be rest assured that we will do our best to keep you safe,” Colonel Jatta QRF 3 commander assured.