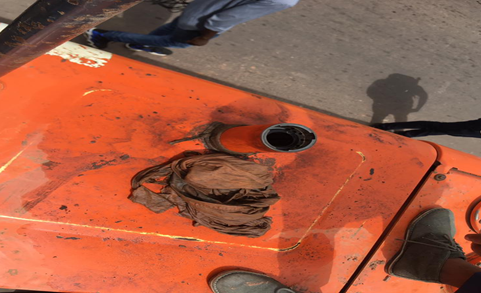 She made these revelations during the minister of Local Government and Lands visit in Jabang this afternoon. The minister was on a field visit to several communities as he vowed to demolish all structures constructed on waterways.

“We have started demolishing structures constructed on waterways on waterways but fuel theft is hindering the progress. For the past two days, people steal over three hundred litters (300) of fuel in the Excavators,” she claimed.

It can be recalled that a week ago when the flood hit the country, the Vice President ordered the minister of lands to act on his mandate by ensuring all properties constructed on waterways are demolished.

Responding to these concerns, Buba Sanyang, the Permanent Secretary at the Ministry of Local Government and Lands said they will provide one hundred and fifty (150) litters for the work to continue.

“We will provide you with one hundred and fifty (150) litters for you to continue demolishing because it is not ideal for another rain to occur while the properties blocking waterways are not demolished,” he said.

However, Sheriff Aba Sanyang said his ministry will not relent in ensuring the right things are done for the safety of all. “We cannot allow this to continue while people continue suffering. All properties constructed on waterways will be demolished,” he emphasized.