From Reading To Inspecting: About 100 UTG Students Embark On A Research Trip To Bissau 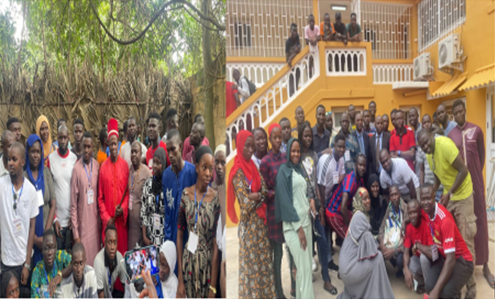 In an effort to learn the historical connections and relationships among countries within the sub-region, about one hundred students from the University of the Gambia (UTG) have embarked on a 5-day research trip to Southern Casamance in Senegal and Guinea Bissau to inspect the historical sites that have influenced the history of The Gambia. The six-day research trip started on July 28th and ended on 2nd August 2022.

The 2022 UTG Historical Fact Finders team, which was led by Dr Ensa Touray, the head of the History department at UTG and his assistant Baboucarr Mboob, inspected Ossiou Monarchy in Cassamance. They were put through by the king who govern 17 villages in the area through the traditional system of ruling as well as the traditional religious way of life.

From there, the student researchers then drove to Bissau where they visited Checau and then the Bissau Military Museum.

Checau is a historical museum that houses paintings, records of slavery; historical artefacts about how the people of the former Portuguese colony were enslaved. The Museum allowed the students to be exposed to the tales of the inhuman treatments meted by the Europeans during the slave trade in Guinea-Bissau and how Bissau natives were captured.

Additionally, the research team also visited the Military Museum in Bissau where tombs of independence hero Amilcar Cabral and former military presidents, including Nino Veira and Malang Bekai Sanyang, the first Muslim president in Bissau are decorated. They were enlightened by the Bissau path to independence chronicling the 11 years of war against the Portuguese which led to their independence.

Dr Ensa Touray, lecturer and the head of the University of The Gambia History department told The Fatu Network that the research trip is enormously important as it exposed the students to the historical connection between the Gambia and Bissau.

“West Africa was an independent zone before the coming of Europeans. We are all connected culturally and in every aspect of human existence. Gambia, Bissau and Casamance were all under Mali Empire but the colonial demarcation separated people. So, this research trip helps us to discover the relationship between the two countries in terms of culture and identity”.

He emphasised that the teaching and learning of history cannot be limited only to the classrooms.

Research trip participant, Fatoumatta Krubally, told The Fatu Network that the trip has exposed her to the historical site and narration of the history of Bissau, which she said is cardinal.

“I was able to learn the history of Bissau and their struggle for independence as well as exposed to the fact that certain people are practising traditional religion and cultures, which is very important to my intellectual pursuit.”  She pointed out.

The students also visited the new Gambia Embassy building in Bissau. They were cordially received by the deputy head of mission in Bissau, Lamin Camara who praised them for embarking on such research. The deputy ambassador exhorted the students to continue their intellectual pursuits as the future of the country rest in the hands of the budding intellectuals.