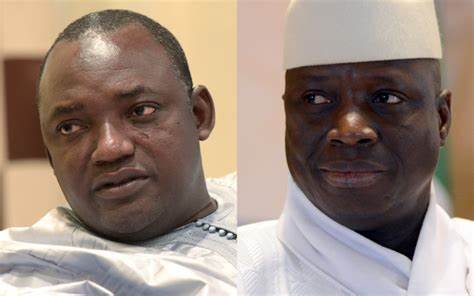 Ahead of the December 4th election Gambians at home and abroad have called on President Adama Barrow to act tough and put a stop to the continued interference of Former Gambian dictator Yahya Jammeh in the country’s politics.

This, those concerned say is in the interest of maintaining peace and security.

They made this call at Fula Bantang in the Central River Region (CRR) of the country, where the party also questioned the love, Gambia Democratic Congress (GDC) and its leader Mama Kandeh have for The Gambia.

This call is in direct response to the recent addresses by former President Jammeh to his supporters and followers of the Gambia Democratic Congress (GDC) at political rallies, one of which occurred in Farafenni.

Jammeh who is currently serving exile in Equatorial Guinea accused the Barrow-led government of destroying all the development achievements of the country spanning from colonialism to his 22-year rule and called on all APRC supporters and Gambian electorates at large to vote for Hon. Mama Kandeh and the GDC in the 4th December election.

“Your Excellency, we are demanding from your government that this must stop, it is unacceptable. From today NPP is asking the government to create the enabling environment for Yahya Jammeh to be arrested and prosecuted. Jammeh wants to create violence in this country and for that matter we want him to be arrested and prosecuted,” Dr. Demba Sabally, demanded on behalf of the NPP.

The Deputy President of NPP, a one-time National Chairman of the Gambia Democratic Congress (GDC) questioned GDC’s claims of loving the country, arguing that if GDC and Mama Kandeh have any love for the country they wouldn’t give a platform to Yahya Jammeh who is in exile in Equatorial Guinea.

“If GDC truly stands for the peace of this country it wouldn’t have created the platform for Yahya Jammeh to speak in its rallies to spark violence in the country. Anyone who is supporting GDC should be wary of this, there is no truth in your politics and am urging all GDC supporters to cast their votes for President Adama Barrow in the 4th December, polls,” the NPP, Deputy President advised.

Jammeh’s involvement in the politics of The Gambia has continued to divide an already polarized nation and if not stopped in its tracks can lead to chaos and a state of insecurity.

Share
Facebook
Twitter
WhatsApp
Linkedin
Viber
Previous articleDisqualified independent candidate who said Gambia is his parents and vowed to die for it flips to GDC
Next articleUDP supporter throws President Barrow’s t-shirt to the ground, steps on it and throws it into thrash bag