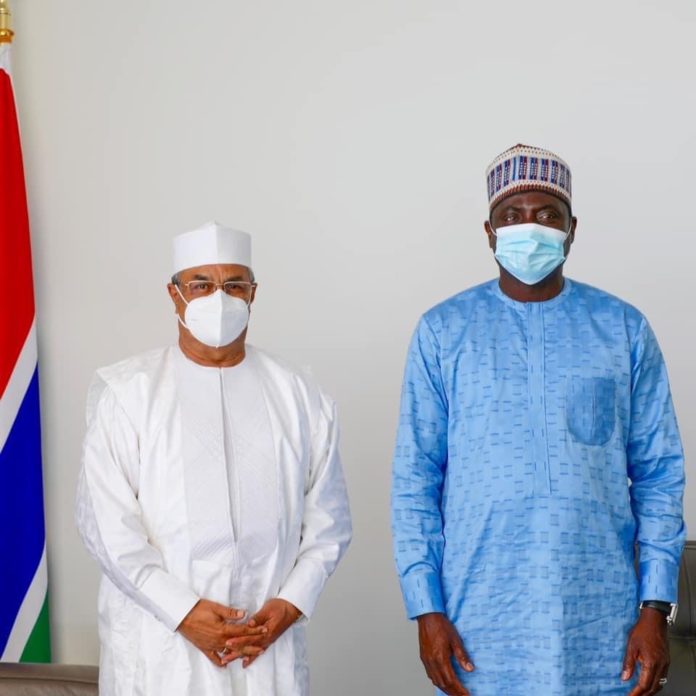 - Advertisement -
BANJUL, 7 October 2021:
The Honourable Minister of Foreign Affairs, International Cooperation and Gambians Abroad, Dr. Mamadou Tangara, on Thursday 7 October 2021 received in audience the Special Representative of the Secretary General and Head of the United Nations Office in West Africa and Sahel (UNOWAS), His Excellency Mr. Mahamat Saleh ANNADIF.
The Special Representative first paid a courtesy call on the President of the Republic of The Gambia, His Excellency Adama Barrow at the State House and later visited the Minister of Foreign Affairs, International Cooperation and Gambians Abroad in his office in Banjul.
The two sides discussed issues of mutual interest and also ways and means of further strengthening national reconciliation and improve governance in The Gambia.
In his brief remarks, the Minister of Foreign Affairs, Dr. Mamadou Tangara  welcomed the UN Special Envoy, and thanked him on behalf of The Gambia Government and also for the excellent support accorded to the Government.
The envoy, who took up office on 26 April, also thanked the Foreign Minister Tangara  for making time to meet him and also commended efforts made to consolidate democratic institutions, national reconciliation, human rights and development in The Gambia.
Mr. Mahamat Saleh ANNADIF also encouraged all Gambians to maintain efforts in building a prosperous Gambia.
Issued by the Communication Unit of the Ministry of Foreign Affairs, International Cooperation and Gambians Abroad