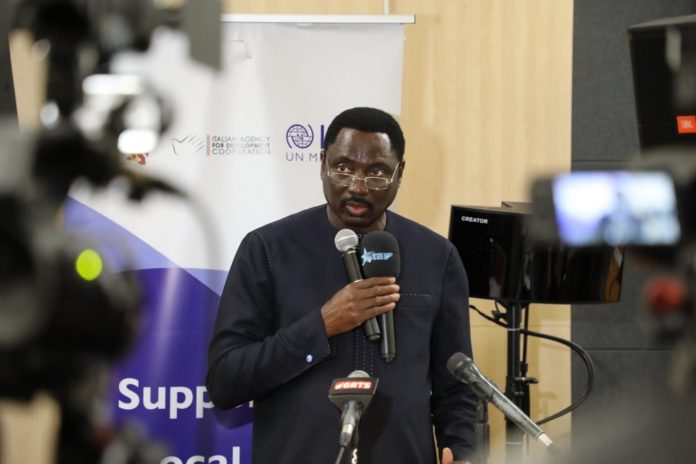 - Advertisement -
BANJUL, 23 October, 2021:
The Minister of Foreign Affairs, International Cooperation and Gambians Abroad, His Excellency Dr. Mamadou Tangara, on 21 October 2021 launched the maiden website and data portal of the Diaspora and Migration Directorate at a ceremony held at Sir Dawda Kairaba Jawara International Conference Centre in Bijilo.
In his launching statement, Foreign Minister Tangara said the Ministry priorities diaspora engagement thus warranted engagement with the International Organisation for Migration (IOM) to launch the first-ever diaspora website and data portal. The move, according to Foreign Minister would expand, enhance and optimize the role of Gambian diaspora in national development as valued partners.
Commenting on the contribution of the diaspora and the government’s intention to further engage the constituent, Minister Tangara said, “Gambian nationals living outside the country have immense potential to contribute towards the national development aspirations of The Gambia. Remittances from Gambians living abroad constitute 48% of the GDP in 2020. Currently, The Gambia is among the 15 countries with the highest number of educated migrants. Cognisant of this, the government is committed to working with the diaspora in implementing the country’s short-term and long-term development objectives”.
Minister Tangara said the aim of the website is to provide a platform for the government to interface and interact with Gambian diaspora as they are crucial partners in national development.
The Honourable Minister also used the opportunity to commend Director Musa Camara for the massively transformation registered since his assumption of the mantle of leadership at the Diaspora and Migration Directorate.
“Everyone discerned how you have transformed the Diaspora and Migration Directorate and I therefore want to seize  this opportunity to thank you profoundly for the great job,” the Honourable Minister glaringly said.
Speaking at the ceremony, the Chief of Mission of the International Organisation for Migration, Ms. Fumiko Nagano, expressed utmost appreciation to the government of The Gambia and congratulated the Ministry of Foreign Affairs and the Diaspora and Migration Directorate for the strong leadership.
Ms. Nagano said the launching of the website is another initiative to support the important work of the Ministry in facilitating engagements of Gambian diaspora in the development process of the country and as well promote trust and information exchange between the government and diaspora.
In his welcoming remark, the Director of Diaspora and Migration Directorate, Mr. Musa Camara, said his Directorate is mandated to facilitate a structured and optimal interface between the government and Gambians in the diaspora in facilitating diaspora investment; creating a diaspora development fund, promoting both circular and labor migration and mainstreaming diaspora expertise in the socio-economic development of The Gambia.
Mr. Camara said one of the tools designed to help achieve the foregoing is the diaspora website and data portal bankrolled by International Organisation for Migration (IOM).
The vote-of-thanks was delivered by Mr. Habib T.B. Jarra, Permanent Secretary II Ministry of Foreign Affairs.  Mr. Jarra returned gratitude to IOM for the outstanding support and the successful implementation of the project. He also thanked the Consultant and the Diaspora and Migration Directorate for their invaluable services in making the project a success.
Website link: https://diaspora.gm/
Follow the Diaspora & Migration Directorate on their social media Handles:
Facebook:  @The Gambia Diaspora & Migration Directorate
Twitter: @MofaDiaspora
Instagram: @MofaDiaspora
YouTube: The Gambia Diaspora