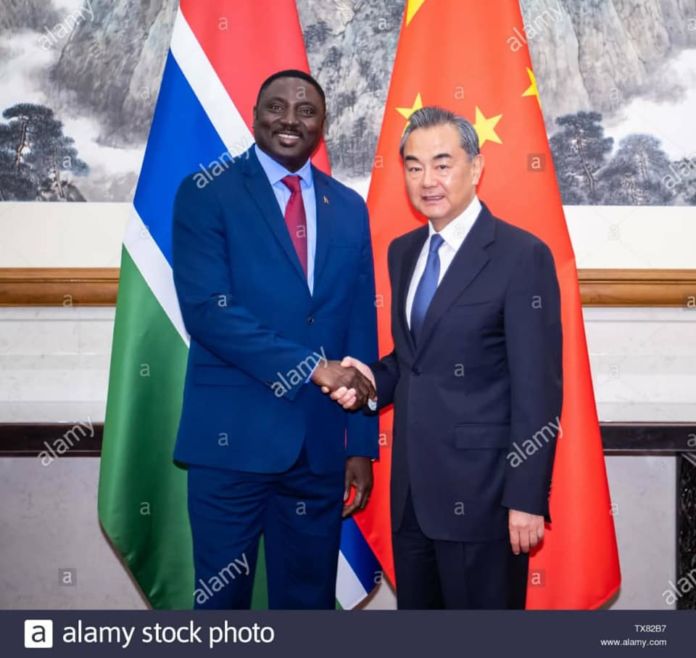 The Honourable Minister of Foreign Affairs, International Cooperation and Gambians Abroad, Dr. Mamadou Tangara, expressed Gambia’s solidarity and sympathy with the People’s Republic of China on the novel coronavirus outbreak and the loss of lives during an audience with the Ambassador of the People’s Republic of China to The Gambia, H.E. Ma Jainchun in his office in Banjul.

The purpose of the audience was to update the Government of The Gambia through the Ministry of Foreign Affairs on the novel coronavirus outbreak.

In welcoming Ambassador Ma, Minister Tangara said the Government of The Gambia appreciates and is grateful to efforts employed by China in containing the epidemic and the support China continues to render to Gambians in Wuhan among other provinces.

The Minister said that The Gambia fully recognises and highly appreciates China’s effective response to the novel coronavirus outbreak.  The Minister shared Gambia’s solidarity with the Government and People of China during this difficult moment while highlighting that The Gambia shares the World Health Organisation’s (WHO) recognition as well as other collaborating partners’ response in tackling the coronavirus.

Minister Tangara therefore assured Ambassador Ma that The Gambia will abide by WHO’s recommendation for countries not to impose travel or trade restrictions on China. He however informed that as a country, The Government of The Gambia through the Ministry of Health will continue to strengthen its surveillance system in all entry points to ensure the safety of people living in The Gambia.

In light of this engagement, the Ministry of Foreign Affairs wishes to inform the general public that the Ministry is in close contact with Embassy staff in Beijing who have reported that no Gambian is infected with the virus.

The Ministry will work with the relevant Government Departments and other partners to ensure that the necessary provisions are provided to Gambian citizens living in China.

For his part, Ambassador Ma disclosed that there are 17,000 confirm cases and 65 percent of which is concentrated in Wuhan province, the epicentre of the outbreak. He said the initial intervention made was to isolate affected persons whilst resource were being mobilised by the Chinese Government. He however said that some of the affected persons were discharged following positive response to treatment. He further informed that the Chinese Government has now mobilised medical teams across China, including military medical personnel to tackle the outbreak.

He said as part of efforts to curb the outbreak, China built 1000-bed-hospital in 10 days; and that another hospital with capacity of 1300 beds will be ready on the 5th February 2020. He said with the on-going efforts, there is optimism that the outbreak will be contained in the soonest possible time.

Ambassador Ma also discussed with the Honourable Minister the WHO’s declaration on the coronavirus outbreak. The WHO Director General has recently hailed China’s decisive and strong measures and expressed full confidence in China’s ability to defeat the outbreak.

Issued by the Communication Unit of the Ministry of Foreign Affairs,International Cooperation and Gambians Abroad