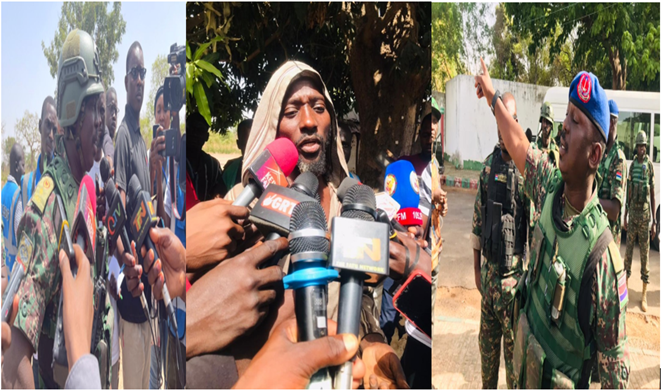 After a month and half of fear and displacement along the borderline villages in Foni, there is excitement among residents as the intervention of the Gambia Armed Forces patrol team helps in restoring confidence in the area. Residents are going back to their villages to continue their normal business.

According to locals, things have been very difficult following the Senegal-MDFC conflict in Casamance.

Ebrima Bojang, Alkalo of Ballen said his people who fled the village are now returning, adding that they now have confidence as the armed forces are providing the needed security.

“Today, we thank Allah and the army patrol team headed by Lt. Colonel Omar P Bojang for their timely intervention. They have been with us when everyone was running to protect their lives.”

Sarba Nyassi, a resident of Baipul village said they are hoping to get back to normal life, while calling for support as the conflict cause them economic loss.

Modou Badjie, Alkalo of Gifanga village said the conflict affected their daily activities, noting that with the support of the army nothing happened to them.

Assuring the people of Foni, Colonel Bojang said people can go about their normal business, confirming that the place is calm.

“Life is back to normal in the villages,” Colonel Bojang emphasized.

Notwithstanding the security assurance of the military, reporters could confirm the destruction caused by the conflict as farms were burnt and properties destroyed.

Residents are still pleading for supports from government, NGOs and individuals. They are also appealing for government to set a military base at the border to help in preventing reoccurrence of any conflict.

They thanked the Gambia Armed Forces for the support during the conflict.