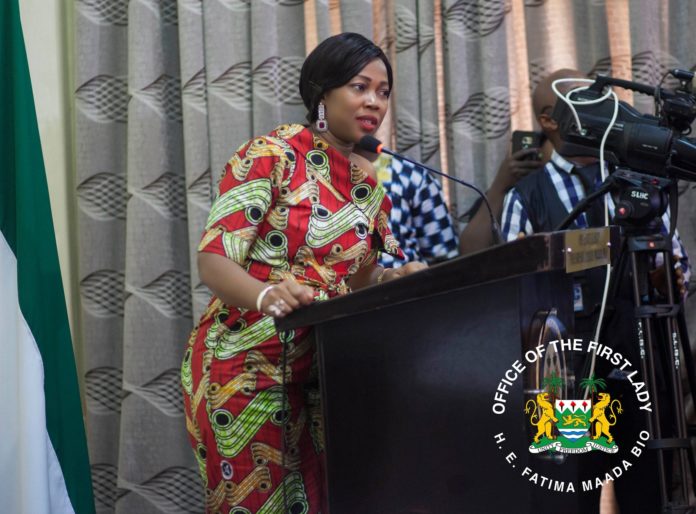 H. E Fatima Maada Bio, first lady of our Republic considers sexual violence a culture that every human being should abhor. Man is born innately good but society corrupts and influences him. Our First lady vividly believes that this act of violence can be controlled or stopped depending on how the society perceives it, and how willing we are as a people to say NO to this 21st Century evil. That is the exact reason why H.E Fatima Maada Bio’s approach is to embark on a sentization of the public. And for the very first time in our history, we had our first lady engaged Wives of Paramount Chiefs on issues of national interest. She strongly believes that with them by her side, together they would make history by winning the fight against rape in our country.

Where do we stand as a nation if we see girls who are supposed to be leaders of tomorrow become mothers? What do we seek to become if our children become prey to men who couldn’t zip up their pants? How can we interprete the failure of a school going kid becoming a dropout due to the effects of rape? How many of us can bear the sight of seeing our girl child carrying unwanted pregnancy?

Today, we witness some of the saddest moments in our nation’s history, worse than some of the toughest moments during the eleven (11) years civil war. The girls we see today being raped are not victims of that civil war, they are the direct result of people who in most cases should be protecting them. The level of rape we witness today was never the case during the course of the war. Lives were lost, properties destroyed, but the rape of underaged girls was never at the level we are witnessing it today. We see 12-13 years girls get unwanted pregnanacies due to rape and in some cases forceful marriages, and subsequently become mothers. Is this the future we seek for our own children at home? Do we want to become grandparents of rapists? I’m sure the answers to these questions are NO. A big NO. It is therefore incumbent on all of us as Sierra Leoneans to support our first lady, and seek the strictest form of punishment for rapists, so as to deter those who might want to commit same in the future.

Our president has emphasized on investing in human capital. What sort of capital could we invest in if the girls that are supposed to be competing with boys are dropouts from schools? If the girls have their very own children to fend and care for at home? If the girls face stigmatization from the people who witnessed them being raped at first hand by calling them names in societies? If the crimes committed on these girls were never reported? If tradition (as is the case in some areas) give the hands of our girl children in marriages to men old enough to become their grandparents?

Rape victims suffer from both physical and psychological violences that stain the heart and brain forever. This can be very harmful to victims and their families in societies, and in some cases have resulted to victims taking their own lives. This *MUST NOT and SHOULD NEVER* be the case in a civilized nation. Sex or marriage in whatever form should be consensual, and children below the age of 18 should not be a party to both.

Rape in its entirety is evil. It is a forced and an unwanted sexual intercourse involving the genitals or any other part of the body. Rape is also a sexual assault. It is an act of violence; it is not a form of consensual sex, love, or intimacy. All these summed up, one can easily say Rape is only committed by indecent beings. Being a rapist does not always mean that a person is mentally ill, we have mentally stable people engaging in rape today. We have all witnessed the level at which rape crimes are reported in our local media. This however does not in anyway conform to normal human practice. As the popular saying goes, “Real men don’t rape”. I stand to choose the path of the millions of our real men in our society todaywho stand against rape. Let us all be seen as whistle-blowers for rape victims and not silencers or contributors to this act. Committing rape is a criminal act. Rape and sexual assault may be committed against females or males; children or elders; wives, dates or intimate partners. Many rapes are never reported to the police for certain reasons, resulting from treats on the lives of victims, to ignorance, to tradition. Rape might be committed by a stranger, but often it is committed by someone known to the victim, and sometimes relatives to the victims. Some people get their victims drugged, drunk, or otherwise unable to respond before committing rape on them. This is wrong and we must put an end to it.

Taking into consideration circumstances surrounding rape cases and the victims’ willingness to report the cases may strongly undermine the law and institutions put to enforce and ensure that perpetrators are brought to book. In light of this, Our Frist lady extends her sincere thanks and appreciation to her husband President Julius Maada Bio for declaring National Emergency on Rape in Sierra Leone. This could not only create fear in the minds of people who want to commit rape but has raised the flag on the need to stop this heinous and dispecable act.