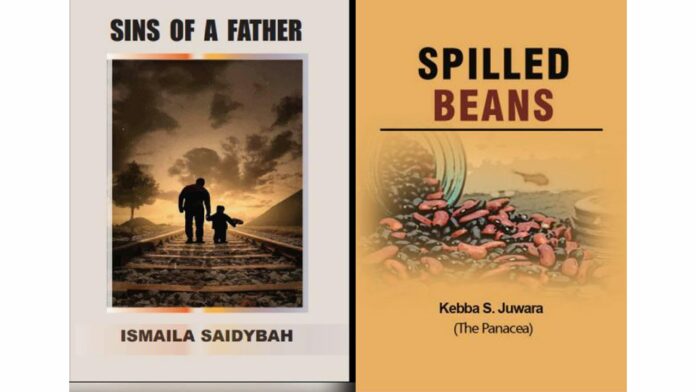 Literary writing in the Gambia is a challenging adventure that many tried but failed to succeed in. It has led many into succumbing to sharing their literary works for free. For the few that ventured into it, they have shouldered some financial burden, especially beginners.

Young published authors, Ismaila Saidybah and Kebba S. Juwara have been struggling with the challenges Gambian writers face; high literary content, and low sales. In this exclusive, the two young writers bemoaned the low sale of their books after publication in The Gambia.

Mr Saidybah, the author of Sins Of A Father and Dreams of An Ophan, said The Gambian Literary market is very tough. The award-winning young writer and the founding coordinator of Writers Space outlined the high cost of publishing a book and the financial rewards after publication.

“It is extremely hard. The Sins of a Father took me almost two years to publish. I first reached out to Fulladu Publishers and the first quotation I got was D48,000. That was too expensive. I also reached out to Gambia Printing and Publishing Cooperation and the cost was almost the same,” Saidybah explained.

Sins of a Father was published in 2019. However, according to the young author, he printed six hundred copies but not more than one hundred copies have been sold.

The Gambia literary scene is inundated with a good number of unpublished writers. Publishing a book in the Gambia has been a nightmare for many due to the cost involved. With only a few publishing houses in the Gambia, many Gambian writers are left with no choice but to self-publish at their own cost.

Another young author, Kebba S. Juwara, who published The Spilled Beans this year, echoed similar frustrations to The Fatu Network. The zealot author said he preferred publishing his book abroad but finance hindered his dream. He had to self-publish in the country.

“Publication is generally cumbersome, both financially and effort-wise.

It took me so many consultations to compile and edit my work. I had to get a proofreader to do proofreading; I was lucky to get it from my mentor, however, it is most costly if charged.

Then I needed to contact publishers. It’s expensive both at home and abroad. I preferred abroad but the company I contacted took so much time to respond, so I published on Amazon, self-publishing style,” Juwara pointed out.

The 2020 Covid-19 Short Story Winner, Saidybah, who, despite the low sale of his debut novel Sins of A Father, has not given up on writing. In 2021, he published his second book, Dreams of the Ophan through Suba Kunda Publishing, which published the book for free.

He called on the government of The Gambia through the National Centre for Arts and Culture to create a special budget line for those in the creative industry so that young writers will be encouraged to write. He explained that many young writers are having complete manuscripts but could not go further due to enormous financial challenges in publishing a book in The Gambia.