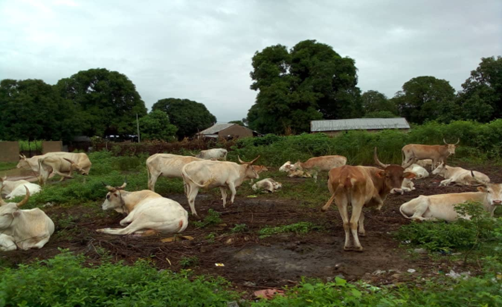 Residents of Farafenni have expressed dissatisfaction over the presence of a cattle farm occupying a busy residential area. They said the farm is a threat to their children who play around and poses an environmental hygiene challenge and discomfort as scattered cow dung (faeces) attracts flies.

Most of the nearby residents who spoke to this medium admitted that the cattle farm should be relocated to make the environment safe and hygienic for residents, especially little children.

“Flies are too many here because of the presence of the cattle farm. Anytime, you pass by files follow you. It’s really a nuisance to residents. They should understand and move to a faraway place with their cattle. It’s a matter of dialogue because cattle farm is not suitable amid people,” Bakary Ceesay asserted.

Another resident, Ndey Marong, stressed on the challenges posed by the cattle in the community.

“Sweeping in the morning is always difficult because of the scattered cattle faeces and flies. This is very unhygienic to the environment. If you have 2-5 cattle, that is understandable, but we are talking of more than 30 cattle. They have to be relocated to an isolated bush.”

According to Ebrima Gano, a community teacher, “The cattle at one time nearly attacked a child who was playing around their farm. Imagine a 3-year-child who was crawling towards the cattle, not knowing whether the animals are dangerous or not.”

The owner of the cattle farm, Ansu Camara, highlighted that lack of animal track and proper grazing is hindering the expansion of his farm.

“Women are always complaining anytime I move with the cattle for grazing. The cattle tracks are virtually blocked and access route to the bush is occupied by gardens and residential settlements.”

He said he has been occupying the piece of land for more than 20 years at the time the farm was a bit distanced from residents. “Many people move to resettle around my farm and many pieces of land were sold. It’s challenging but I have to endure,” he said.

The ward councillor for the Farafenni Ward, Papa Tunkara, noted that the Council is not responsible for allocating land to cattle farmers for them to relocate.

“If you see people complain, it’s because of development. Those who cannot be patient with him have to complain. There are bushes in the nearby villages and empty crop farmlands. He can move with his cattle there. In fact, many crop farmers need cattle to settle on their lands to enrich soil nutrients.

When contacted for his reaction, the president of the National Livestock Owners Association, Mr. Ebrima Jallow, asserted that there was a cattle track and grazing area around that vicinity which he claimed was sold, making difficulties for the cattle farmers.

Mr Jallow appealed to unhappy residents to be patient and says all blames should not be squarely on the cattle farmer for the fact that local authorities fail to cater for the plights of cattle farmers.