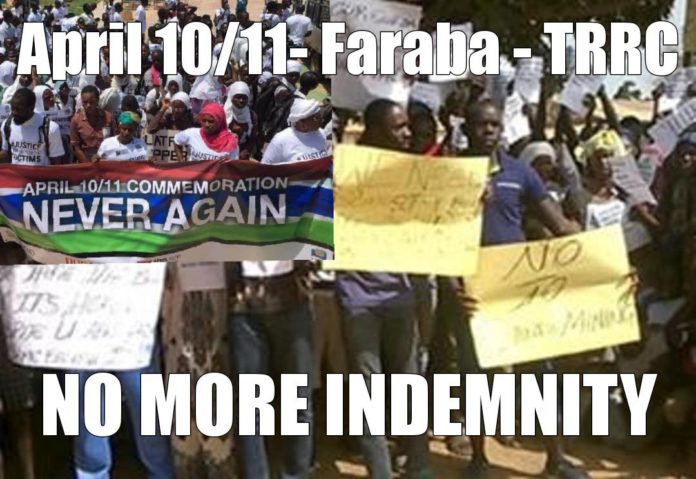 The April 10/11 Memorial Foundation has described as ill-advised a statement from the Office of the President announcing the scrapping of the murder case of five police officers.

The foundation in a statement on Thursday said it “would like to express its profound concern and disquiet over the President’s ill-advised press release announcing the halting of the Faraba Banta murder trial of police officers.”

The statement read: “We are further concerned that it was necessary for the Minister of Justice to have to clarify and correct the press release, clarifying it as an “unfortunate choice of words.”

“We fear that the original position contained in the President’s Office statement is at odds with the rule of law and sends a terrible signal both to all victims of crimes carried out by the state, and to society at large, especially in the context of the start of the TRRC.

“Nearly 19 years ago, on 10th and 11th April 2000, 16 Gambian students were murdered, and many more injured, disabled and traumatised, by members of the PIU and other security forces opening fire with assault weapons. In the aftermath of the massacre, the Jammeh regime refused to take responsibility for the crimes it committed against defenceless citizens. A Commission of Inquiry was set up and at the conclusion of the investigation, the commission issued a report. To this day, the full report has never been published by The Gambia government. Even though the report named the members of the security forces who were responsible for the atrocities, no one was ever prosecuted for the murder of the students. Instead, in order to cover up these events, the President introduced legislation which gave immunity from prosecution to those responsible under the guise of The Indemnity Act.

“Nineteen years later, victims of the student massacre are still waiting for justice and have been asked by the government to place trust in the newly constituted Truth, Reconciliation and Reparations Commission to deliver this to them. The call for justice in this context is to simply follow the law and not make new laws to allow criminals to go free, or to issue pre-conviction presidential “pardons” in the name of reconciliation.

“We are greatly concerned with the glaring parallels between the handling of the April 10/11, 2000 massacre by the Jammeh regime and the events that unravelled following shootings by the Police at Faraba Banta in 2018. It seems that no lessons were learned from the April 10/11 Inquiry. Armed police were again sent to a situation of protest, which resulted, again, in young people being maimed and murdered by those whose role should have been to protect them. Two key findings of the Faraba Commission of Inquiry were that there was “no proper coordination of the operation by the police on 18th June 2018” but that “the police intervention unit personnel who fired at the villagers did so without lawful command.”

“It is worrying and un-nerving that PIU officers armed with assault weapons are still being dispatched to peaceful protests, clad in riot gear and brandishing AK47’s, rather than being trained in mediation non-lethal means of crowd control. There is a real fear that April 10-11, Kanilai and Faraba are bound to happen again if the past failures are not strongly addressed.

“We would have hoped that that the government would learn from the failures of the Jammeh regime and seize the opportunity to distinguish itself from that regime by handling this case in a manner different than the way Jammeh handled the massacre of April 10/11, 2000.

“The April 10/11 Memorial Foundation was reassured when prosecutions were started against those who opened fire on the 18th of June in Faraba, just as we hope that those who did so in 2000 will also be held to account. We believe, without prejudging the results of any prosecution, that the only way that events like these will stop is if the security forces are legally held to account, both collectively and individually when such events occur. Only this will force those in government and those in command to rethink their strategies and practices when policing demonstrations. When those in authority understand that they can be held accountable to society for the results of their actions, or inactions, by a court of law, they will exercise more caution. The government must understand that these are crimes against society at large, and not just families and communities immediately affected by these tragedies.

“We therefore must register our concerns and disappointment about what appears to be the President’s instructions to the Attorney General to “immediately withdraw all the charges against PIU Officers” BEFORE the criminal justice process has run its course. By his utterance, we believe the President has undermined the rule of law and put the Attorney General and the Judiciary in an untenable position. We do not make this statement lightly.”