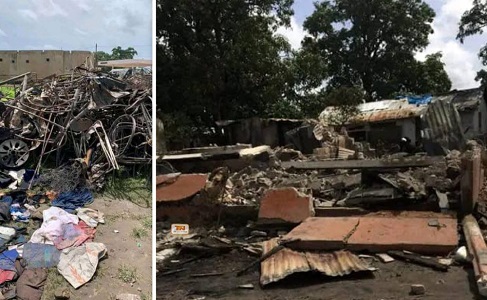 Fatou Fatty, the wife of Bakary Bojang whose house was recently devastated by a fire outbreak has told The Fatu Network that his husband doesn’t have a bank account but adopted the traditional way of keeping bulky cash in the house which was entirely burnt.

The fire outbreak was blamed on a faulty electrical socket. The house, which is within the Bojang Kunda compound, is situated in Brikama Nyambai.

The victim’s wife, who spoke extensively to his medium, confirmed that his husband’s exact damages could not be quantified due to improper recording of assets and cash in his house.

“It will take years to recover from the devastating fire because everything including the unknown [amount of] cash is destroyed. My husband deals in vehicles, he even sold two vehicles recently and that money is also kept in his house. He has his own saving box which he controls. Normally, he saves money there and other amounts entrusted to him for safekeeping. It’s important to save your money at the bank, it is safer there and for situations like this,” said Fatou Fatty, Bakary Bojang’s wife.

She added that materials including chairs, vehicle spare parts, clothes, refrigerators, suitcases and other utensils and valuable household materials were destroyed.

“Some litres of fuel were kept by my husband for emergency use since the upsurge in fuel prices and scarcity. This magnified the fire thereby inflicting devastating damages on his family who struggle for years to purchase the necessary fixtures and fittings in the house and built it to standard. This is very severe, and the recovery process might take time.

“My husband is a traditional healer who cures people. His medicines were also destroyed. He keeps many materials related to his work, but all are damaged. The materials were brought from faraway bushes. Those undergoing treatment has to be delayed because psychologically he is not prepared to continue with their treatments. The damage really traumatizes him, Fatou stated.

According to the wife of the fire victim, the fire was difficult to contain due to different types of materials which were not properly arranged. This makes other materials easily catch the fire. It took time for the Fire and Rescue Service personnel to reach them.

According to his wife, youths attending a nearby entertainment show at the Brikama Jokor rushed to the scene. The extent of their rescue was minimal hence there were no proper means of putting out the fire.

“Most of the people residing at home here are females. We could not do much to put out the fire. It nearly burnt the next house, but we were quick with the help of other youths from outside to stop that,” Fatou told TFN.

The victim of the fire outbreak Mr Bakary Bojang looks emotional and could not directly narrate his ordeal: “I believe in what God destined,” he said.

Currently, Mr Bojang stays with his family in a tiny house pending the reconstruction of his damaged house.