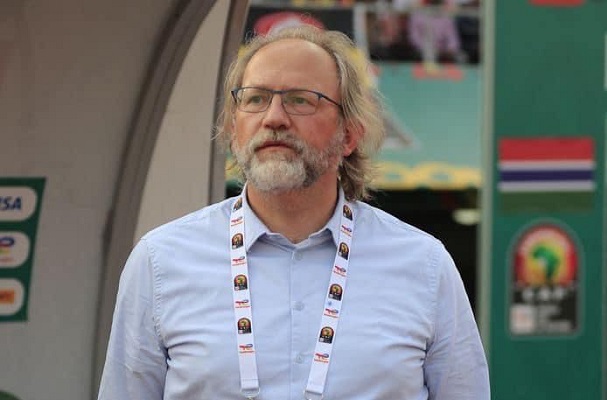 Following rumours linking him to the Ghana National Team job, the head coach of The Gambia National Team, Tom Saintfeit, has revealed that he is not in a haste to leave the Scorpions as the head coach despite recently rejecting different teams, including DR Congo national team. He however admitted that he will move on if better offers arrive.

The Belgian tactician exclusively told The Fatu Network that he has a contract with The Gambia National Team until 2026 and will not push his way out, but if the right offers arrived, he may decide otherwise.

“For me, I am not eager to leave but in football, you never know. If the right offer comes, everything is possible and that’s normal in the job”, he explained.

Ghana Sports World has reported that the Ghanaian Football Association are considering hiring Tom Saintfeit to replace Otto Ado as the head coach of the national team.

However, Tom told The Fatu Network that he hasn’t been contacted by the Ghana Football Association. He further told this medium that he has rejected numerous offers from different teams and countries, including DR Congo, since after the country’s breakthrough performance in the African nation’s cup in Cameroon early this year.

“After the Nation’s cup, my name is mentioned by several big nations. I got offers last month from Raja Casablanca, from Israel and lastly, I got an offer from DR Congo, and I rejected them even though they are financially better than what The Gambia [is] paying me”, he revealed to The Fatu Network.

Ghana’s senior national team are just from playing FIFA World Cup in Qatar. Compared to The Gambia national team, moving to Ghana will be a career elevation for the Belgian tactician.

According to Tom, he works in different countries before taking over The Gambia National Team job, but none gives him more pleasure than The Gambia. He lauded The Gambia for being a supportive nation to him.

He further asserted that despite qualifying the country for its first-ever continental football showpiece, the Belgian said his priority now in his contract is to qualify the Scorpions for the 2026 FIFA World Cup.

Recently, scores of Gambians have been criticizing the coach for his defensive tactics.

Share
Facebook
Twitter
WhatsApp
Linkedin
Viber
Previous article001Jb_University of the Gambia Medical Students Association (Unigamsa)_© Health Benefits
Next articleO Boy: ‘I am the father of all these artists’