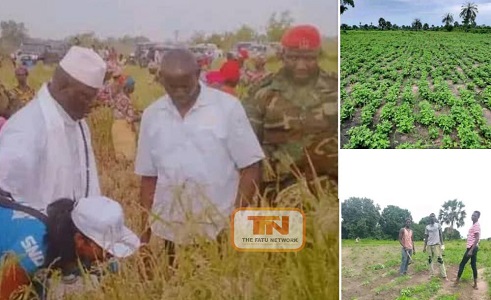 Gambian youths who had responded to the call by ex-president Yahya Jammeh for citizens to go back to the land (revive farming) have expressed frustrations over the coalition government neglecting them following their takeover in 2017.

In an exclusive interview with The Fatu Network, their leader Alhagie Karamo Jammeh highlighted that their agricultural production output has drastically reduced due to a lack of support from the new government. Agricultural machinery as well as financial support which were provided by ex-president Jammeh are not available now and they have no choice but to depend on their little resources to sustain their agricultural initiative.

“After the former president left, we don’t get any help from anyone. We struggle and grow and after growing, we will contact markets and rent a car from Kombo and go around that’s why we were calling on the government to give us support because, with their help, we can continue with the effective and sustainable initiative of “growing what you eat, eat what you grow initiative,” Mr Jammeh said.

“Not everything about ex-president Jammeh is bad, he championed good things for the citizens. We cannot ignore everything associated with him. Engaging in agriculture to feed ourselves is for our benefit. After the fall of the Jammeh regime in 2017, most of the youths working with me decided to return to their various villages because they were hopeless,” he explained.

According to Alhagie Karamo Jammeh, his association started in 2019 with 7 youths with a view to engender the back-to-back initiative of ex-president Yahya Jammeh and also to use it as a self-employment venture.

“This agricultural activity started with 7 youths and presently we have a total of 37 youths working together and also collaborating with some experienced Gambian farmers. We visited many institutions of the government still they are not answering our call for help this year. We have already registered 58 villages in the Gambia to engage different youths to expand our initiative and ensure that the back-to-land initiative remains a reality,” Mr Jammeh stressed.

Mr Jammeh on behalf of the Champion Farmers appeals for support in agricultural input, and technical support to enable them to harvest high yields on their farms and meaningful links with other unemployed youths nationwide.

“Agriculture is the backbone of the economy and must be enhanced. All necessary supports needed must be put together to make food security and self-employment possible. We used to link with Yahya Jammeh but since the coalition government came to power, they don’t support us,” Mr Jammeh lamented.

The Champion Farmers still won’t relent in their move to promote the farming agenda of former president Jammeh, back to the land. Grow what you eat and eat what you grow.