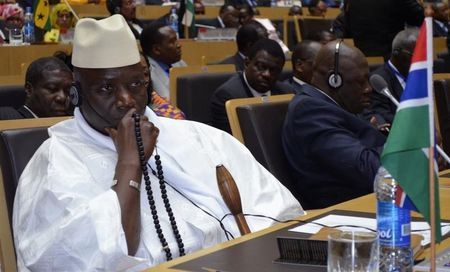 The mother of former army colonel Lamin Sanneh on Tuesday said her son was working with a vicious person.

Mba Meta Jagne told journalists at a press conference held at the Victims’ Centre in Kololi that his son was destined to be a soldier.

“God helped me to put him in school. He was destined to be a soldier. He went for peacekeeping missions everywhere. He went to seven countries,” Mba Meta said of his son Lamin Sanneh.

Lamin Sanneh is a former lieutenant colonel in the Gambia Armed Forces who fell out with former President Jammeh. He left the country for United States only to come back in December 2014 minded to overthrow Jammeh. The December 30th adventure misfired leading to his agonising death. His remains will finally be handed over to his family four years after his death.

His mother, Mba Meta, said: “He was working with this person who was cruel to people, to Muslims, to Gambians, to people’s relatives. God made Lamin to be working under him and he sacked him. He (Lamin) then went to America with his family. I was the only one he left here.

“When he realised he didn’t leave peace behind him, he left everything there. There’s more money in America than here and the living standard there is far better. He left all that there to come and lay down his life for the country so that all those that Jammeh was killing, dismissing could get respite.

“We all know the job of a soldier entails going to other countries to keep peace there. But when your own country is not peaceful, what you can do is to lay down your life for peace to return to your country. That is what Lamin did.”