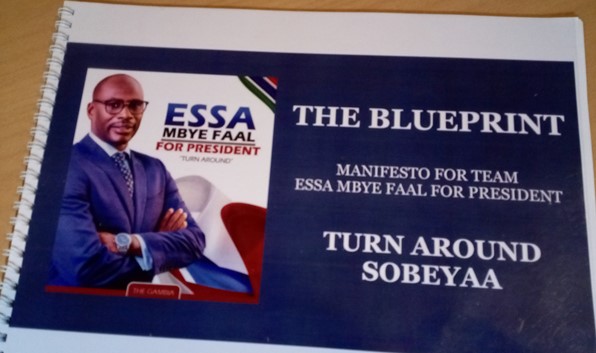 One of the presidential candidates for the December 4th, 2021, Presidential Election has today Wednesday 10th November 2021 Launched his ‘Blueprint for A National Turnaround’ Manifesto. Essa Mbaye Faal Launched the Manifesto at his Bijilo Residence.

Speaking to pressmen Essa noted that the ‘Blueprint for A National Turnaround’is a comprehensive breakdown of action points his presidency will work on when elected in December 2021.

He stated that for the positive transformation of The Gambia there is a need for competent heads, able hands, appropriate tools, and an abundance of result-oriented Gambians supported by leadership with ideas to turn around the country for prosperity.

He further noted that the Gambia is not in need of yet another long and policy document as many of such exist, what the Gambia needs he says is an action plan, which would serve as a blueprint for development.

His first 100 days as President Essa promised to lay the foundation of a progressive state. He said he would then go on to double the country’s GDP in 10 years and tackle the scourge of youth unemployment in 5 years.

He also promised to address the issue of corruption, build the health care system, and ensure Gambian troops are capacitated to take over the security of the Gambian people when elected president.