“Enter my boat to avoid getting drowned”: President Barrow tells citizens in Foni they should hop into his boat while there is time 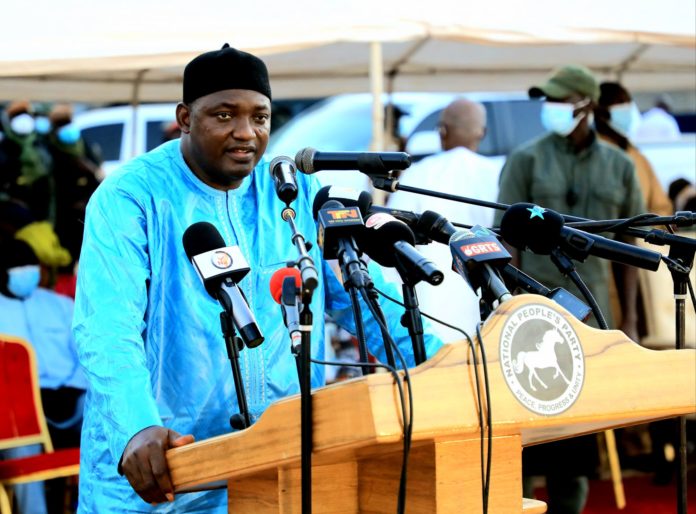 President Adama Barrow resumed his campaign on Tuesday after taking a day off following his return to Banjul on Sunday. The president held rallies in Kalagi, Bondali and Sibanor. In Bondali, the president said Gambians have made it clear they want to continue having him as their leader whether one believes it or not.

“Whether one accepts or not, Gambians have agreed that they want to continue with President Barrow from 2021 to 2026,” the president said.

President Barrow called on citizens of Foni to enter his boat before it departs. According to the president, a person risks getting drowned if he doesn’t enter his boat.

“President Barrow’s vessel is anchored at its original spot and it’s Noah boat. Anyone who could should enter the boat. Enter the boat before it departs. If the boat departs, the ocean will take you,” the president said.

The president also vowed that the people of Foni will enjoy development dividends that they could not get during former president Yahya Jammeh’s rule.

The president said: “Foni is part of Gambians and I want to tell you that any development you didn’t get during President Jammeh’s government, you will get it from President Barrow’s government.”

Hamat Bah earlier on warned Gambians against voting for UDP leader Ousainou Darboe who can’t manage the affairs of his party talk less of a whole country.

“All what Darboe is interested in is to be president and that’s all. Therefore, I want to warn Gambians to be careful never to make a mistake to elect a person who cannot manage a party much more a nation,” Mr Bah said.

Former Foni Jarrol MP Bory Colley speaking at the rally assured President Barrow that Foni will vote for him in next month’s election.

“We are behind you today and tomorrow, we will take our vote and give it to you,” Mr Colley said.

The president has vowed to carry Foni along in all his development programs insisting Gambia would never be complete in any counting that leaves Foni out.