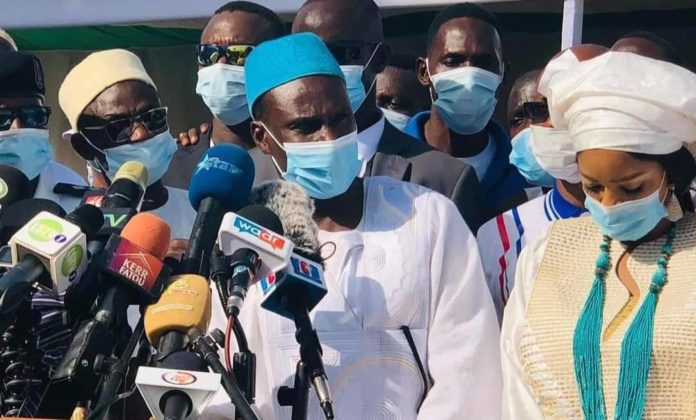 The Gambia Transport Union has issued a statement pushing back at Essa Faal’s claims he entered into a contract with the union to transport his supporters to IEC on Thursday for his nomination.

An angry Essa Faal told reporters on Thursday they contracted the Gambia Transport Union at Brikama and paid for 200 minivans.

“Guess what they (NPP) did, they went to the garage while these people were preparing to go and they (NPP) came and doubled the money. So that the drivers will refuse to transport our people and they succeeded,” the politician claimed.

But in a statement, GTU said the claims made by Mr Faal do not represent the reality of the arrangements.

It said: “We wish to make it crystal clear that  neither the Union nor the drivers had entered into any contract with Mr Essa Mbye Faal. Furthermore, no amount of money was paid to the Union or drivers by Mr. Faal.

“However, on Tuesday 2nd November 2021, agents of Mr Faal visited our brikama office to arrange for vehicles at a cost of D2500. They promised to pay drivers an advance payment to be completed after the exercise. This advance payment was never made.

“The management of the General Transport Union wishes to unequivocally state that, it strives to represent the welfare of its members in an apolitical and non-partisan environment.

“To this effect, we provide transport services to individuals and groups based on agreed business terms and conditions without discrimination, or ill will against any person or groups. In light of the above, we solicit the usual cooperation and partnership of the public at all times.”

Share
Facebook
Twitter
WhatsApp
Linkedin
Viber
Previous articlePress Release: Presidential /Executive Directives or orders are not Law, contrary to the statement by the Deputy IGP
Next article‘Congratulations for your second term’: OJ congratulates President Barrow for winning next month’s election