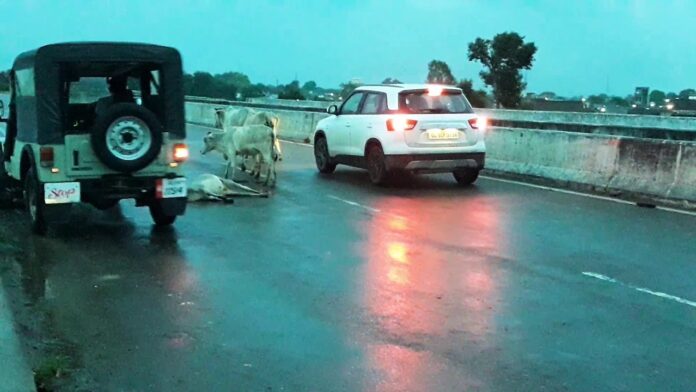 Nomadic herdsmen move with their cattle from one place to another in search of food and water; also move away from areas of pests and disease infestation. This constant unsteadiness exposed them to the risk of being hit by a speeding car hence their movements often involve crossing a motor highway.

“The cattle don’t belong to us; we are hired to take care of them. They are under our care and we ensure that they get food by moving them to areas of greener pastures,” Cherno Kandeh a herdsman said.

He emphasized the need for drivers to watch out for crossing cattle, noting that domestic animals also have the right to movement and killing them by over-speeding is reckless. He said motorists do hit-and-run.

“I came from Basse to work for a cattle owner in Kitty, last year alone 3 of my cows were hit on the Gunjur highway. The motorists normally hit and never stop. It is difficult at that instant to identify the driver and the number of the vehicle,” Demba Bah said.

Cattle stand perpendicularly to the sun’s rays in the cool morning to absorb heat through their large flanks, or they stand in the direction of strong winds to avoid being unduly buffeted and chilled.

The cattle herdsmen struggle to feed their animals in a volatile environment. In addition to the lack of sufficient grazing land, water shortages and disease infection, killing them by a speeding vehicle is another emergency, ugly predicament for Their survival.

“The first time a vehicle knocked and killed a cow under my care, the cattle owner blamed me for carelessness. I had to terminate my contract with him and move to another area. I am now working with a different farmer. This can cause us joblessness and even pay compensation to the cattle owner because the drivers normally hit and disappear,” Decori Baldeh said.

Mbye Sowe is another herdsman who lost 5 cows within a year. He works for a renowned cattle farmer.

“If it’s a large animal, crouch down under your steering wheel in case the animal comes through the windshield. If you do hit the animal, pull over to the edge of the road safely,” Mbye Sowe advised.

Following claims by herdsmen, I spoke to a few drivers plying Gunjur highway to get their reactions.

Alagie Saidy and Lamin Bojang, both commercial drivers, confirmed the occasional killings of cattle by drivers.

“It happens by incident sometimes but it’s never our fault. They can’t scatter their cattle on the highway. I used to see cattle crossing but sometimes the herdsmen are not closer to them to ensure that they cross smoothly,” Abdoulie Njie said.

Samba Colley defended the drivers, arguing that they obstruct traffic. The drivers plying the Kombo South highway blame herdsmen for not controlling their cattle.

Loss of fertile grazing land for farming, loss of access to water sources for their herds, and lack of recognition of traditional territory and communal land holdings area are major challenges for herders.

Crossing through traffic is another challenge that could affect the growth of livestock farming.