“Dr. Ceesay Is the Solution to The Gambia’s Problems”-supporters say 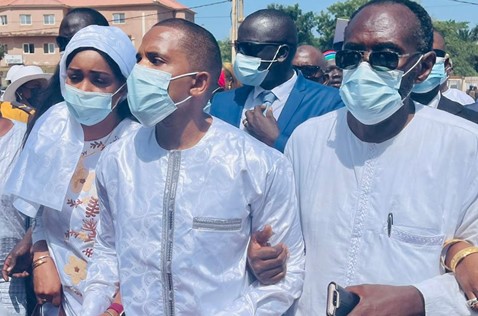 Supporters of the Citizens’ Alliance (CA) Party have said that their candidate Dr. Ismaila Ceesay is the only solution to Gambia’s problem. They were speaking to The Fatu Network while escorting their candidate to do his nomination. The supporters vowed to vote for Dr. Ceesay saying he will bring positive change to The Gambia.

Ansumana Conteh a resident of Badibu said Dr. Ceesay is the only solution to the problems Gambians are facing.

“We will vote for Dr. Ceesay on December 4,” he said. “He has the knowledge and he can develop this country,” he added.

Abubacarr Bah, CA Foni Berefet Chairman said he is optimistic of a CA victory in the 2021 elections. Bah told The Fatu Network that they supported Dr. Ceesay because of his willingness to transform the country.

“We can only have a better Gambia if we vote for Dr. Ceesay,” he said. “The resources of this country have been misused by our previous leaders and we need a positive change. We are going to make him [Dr. Ceesay] win through the ballot box come December, we will take Dr. Ceesay to State House,” Bah said.

The supporters alleged that people have been making efforts to discourage Dr. Ceesay from contesting.

“This crowd today is a clear manifestation of Dr. Ceesay’s victory,” Ansumana said. “This country is heading to a different direction and we need radical change to take ownership of our country,” he said, adding that the rate of unemployment is high, and the youths are frustrated.

Kumba Jallow another supporter said they support Dr. Ceesay for a better change. “Dr. Ceesay is honest, competent, hardworking and knowledgeable,” she said, adding that the CA leader can develop the country.

“We are supporting him not because we know him but for the love he has for the country,” she said.

Share
Facebook
Twitter
WhatsApp
Linkedin
Viber
Previous article‘They can hate me’: Imam Chebo Cham warns citizens again against selfish politicians
Next articleDecember 4, 2021: What it Means to The Gambia, and For Gambians