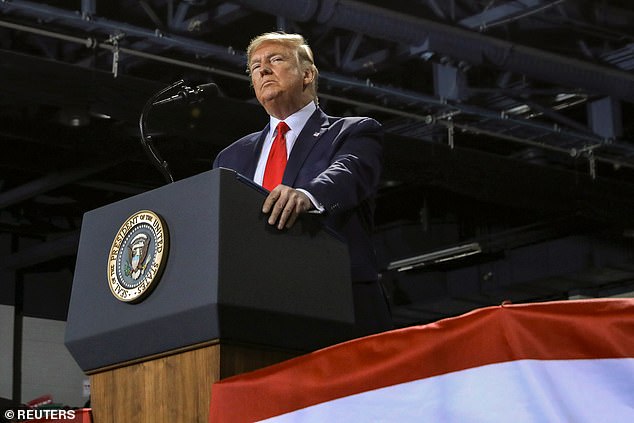 Donald Trump became the third president in American history to be impeached on Wednesday on a largely party line vote, setting up a formal trial next year in the Senate.

Republicans lawmakers rushed to the speaker’s dais to cast their votes by paper ballot, which means the votes had to be tallied by hand by the Clerk of the House. The usual procedure is for lawmakers to vote via an electronic system.

But Democrats used the electronic system and 230 voted for the first article impeachment – abuse of power. That number hits the simple majority needed for approval. There were 197 voting no.

Two Democrats voted against the article – Colin Peterson of Minnesota, who said he would be a no vote, and Jeff Van Drew of New Jersey who is reported to be switching to the Republican Party.

Speaker Nancy Pelosi voted yes, casting a rare vote. The speaker of the House typically does not vote.

Trump was in Michigan for a campaign rally as the House of Representatives held its impeachment vote. He was speaking in Amash’s district.

‘By the way by the way it doesn’t really feel like we’re being impeached,’ he told the crowd.
He turned to bragging about his accomplishments, including the Space Force which was just established by congressional vote.

‘I’ll be able to tell my kids someday and everybody else, see that Space Force, that was my baby,’ he said, drawing a loud roar from the crowd.

The president was silent as he left the White House on Wednesday to head to his rally but he tweeted furiously throughout the day.

‘SUCH ATROCIOUS LIES BY THE RADICAL LEFT, DO NOTHING DEMOCRATS. THIS IS AN ASSAULT ON AMERICA, AND AN ASSAULT ON THE REPUBLICAN PARTY!!!!,’ he wrote in a furious all-caps assault earlier in the day.

Speaker Nancy Pelosi kept her Democratic lawmakers in line, with only a few Democrats defecting.

There are three not-voting congressional seats: the seats held by Katie Hill, who resigned, and Elijah Cummings, who died, have not been filled. Republican Congressman Duncan Hunter can’t vote after being found guilty of a felony.

Additionally, Republican Rep. John Shimkus missed the vote because he was on a pre-planned trip to Africa.

‘Long before today’s votes were scheduled, my wife Karen and I made arrangements to visit our son Joshua in Tanzania where he’s serving in the Peace Corps,’ he said in a statement.

The day-long debate on the House floor was a ping pong back-and-forth of one minute speeches were Democrats accused the president of using a foreign power to help him win the 2020 election and Republicans claimed Democrats were trying to over turn the 2016 contest.

‘This is not about Ukraine. This is about power. Donald Trump has it and Democrats want it,’ said Republican Rep. Matt Gaetz, one of Trump’s biggest allies on Capitol Hill.

Democratic Rep. John Lewis, a legend of the civil rights movement, urged lawmakers to do the right thing and vote to impeachment.

‘When you see something that is not right, not just, not fair—you have a moral obligation to say something, to do something. Our children and their children will ask us: “What did you do?”‘ he said.

Speaker Nancy Pelosi began the formal debate on the articles of impeachment by saying the president gave them no choice but to impeach him. She received a standing ovation from her Democratic lawmakers when she was done.

‘As speaker of the House I solemnly and sadly open the debate on the impeachment of the president of the United States. If we do not act now, we would be derelict in our duty. It is tragic that the president’s reckless actions make impeachment necessary. He gave us no choice,’ she said in her speech in the well of the House, standing next to a sign with a picture of the American flag and reading ‘to the republic for which it stands.’

The speaker was dressed in black for the day. Pinned to her dress was a broach in the shape of the Mace of the House – a symbol of the power of the speaker.

Pelosi, who fought to become speaker after Democrats won control of the House after the 2018 election, has received kudos from her party members on her handling of the impeachment inquiry.

‘He tried to cheat and he got caught,’ Schiff said in his remarks on the House floor.

The debate grew more impassioned as the time for the final vote got closer.

One of the last lawmakers to speak, House Republican Whip Steve Scalise delivered a fiery defense of President Trump, throwing papers on the desk and waving his arms to the cheers of his fellow GOP lawmakers.

‘This has been about a political vendetta,’ Scalise said.

And he echoed Republican charges Democrats were trying to over turn the 2016 election.

‘This isn’t just about Donald Trump. They don’t just hate Donald Trump,’ he said of Democrats. ‘They hate the 63 million Americans who voted for this president. The forgotten men and women of this country who have been left behind.’

‘No, no,’ the Democratic lawmakers yelled from across the chamber. Republicans started cheering Scalise on to drown them out.

Rep. Diana DeGette, was presiding over the chamber, gaveled for a return to order.

Schiff made the closing argument for Democrats and he appealed to lawmakers to think of the future, when they could be the majority in the House.

‘You may be one day — although you may not act like it, you may one day be in the majority. You will want to hold a president accountable. What will you say when that president says, you were a paper tiger, you have no oversight, I can ignore your subpoenas, what will you say? What will you argue? No, no, that was different. Then we were in the minority. Then it was a Republican president. Will that be your argument?,’ Schiff said.

He also pointed out that Republicans, under Ronald Reagan, cared about standing up to Russia and President Vladimir Putin.

The final line up of GOP speakers rallied the party against the ‘sham impeachment’ as they called it, while the Democratic speakers focused on the vote ahead.

‘I see a president who will put his head down in spite of the sham impeachment and he will do his job and he will tell the American people that I care about you and he will still put the economy first and he will make sure this country stands strong,’ said Republican Rep. Doug Collins of Georgia, earning a standing ovation from his party.

‘Democrats did not choose this impeachment. We did not wish for it,’ House Majority Leader Steny Hoyer said as a few Republican lawmakers yelled ‘Come on’ in response.
The impeachment vote was a foregone conclusion given Democratic control of the House.
The old arguments were rehashed by both sides of the political aisle and few lawmakers made impressions.

But one who did was Republican Rep. Barry Loudermilk of Georgia, when he compared Trump to Jesus Christ.

‘Before you take this historic vote today, one week before Christmas, I want you to keep this in mind. When Jesus was falsely accused of treason, Pontius Pilate gave Jesus the opportunity to face his accusers. During that sham trial, Pontius Pilate afforded more rights to Jesus than Democrats have afforded to this president in this process,’ he said.
But Nadler countered that the president had the opportunity ‘to come and testify…to send his counsel, to question witnesses.’

‘He declined to do so,’ Nadler added.

The Democrat from New York has been full of come backs after Republicans finished their remarks.

‘They think Hillary Clinton should be the president and they want to fix that,’ Stewart said.
Nadler shot back: ‘I remind the gentleman if President Trump is impeached and removed, the new president will be Mike Pence and not Hillary Clinton.’

That brought Nadler cheers from the Republicans, who applauded his words.

‘Hurrah,’ one Republican lawmaker seated on the House floor. ‘Thank god,’ said another.
Nadler also blasted GOP Congressman Louie Gohmert who pushed the unproven conspiracy theory that it was the Ukraine – and not Russia – that interfered in the 2016 election.

‘I am deeply concerned that any member of the House would sprout Russian propaganda on the floor of the House,’ Nadler said in response.

‘He accused me of Russian propaganda,’ Gohmert said. ‘Have his words taken down.’

While Trump watched the proceedings at the White House before leaving for his rally, Pelosi sat quietly in the back of the House chamber throughout most of the day, listening to the speeches.

House Chaplain Patrick Conroy began the morning with a prayer that acknowledged the task before the lawmakers.

‘We ask guidance for members of the people’s house,’ he said, asking God to ‘give them wisdom and discernment’ in their task ahead.

Wednesday’s vote comes less than five months after Trump got on the phone with Ukrainian President Volodymyr Zelensky and pushed him to announce an investigation into former Vice President Joe Biden – a top contender for the 2020 Democratic nomination.
Democrats allege Trump with held $400 million in military aid to Ukraine in order to put pressure on Zelensky. Trump has denied any wrong doing.

The vote was scheduled one day shy of the 21st anniversary of the last time the House took such a step – impeaching Democratic President Bill Clinton for lying under oath on December 19, 1998 after he failed to come clean about an affair he was having with a former White House intern, Monica Lewinsky.

The impeachment inquiry now moves to the Senate, where Trump will go on trial.

It will be presided over by Supreme Court Chief Justice John Roberts.

Senate Majority Leader Mitch McConnell said it will begin in January after senators return from their holiday break.

He and Senate Democratic Leader Chuck Schumer are set to meet this week to determine the process the Senate trial, including its precise start date, how long it will last and whether additional witnesses will be called. (DailyMail)