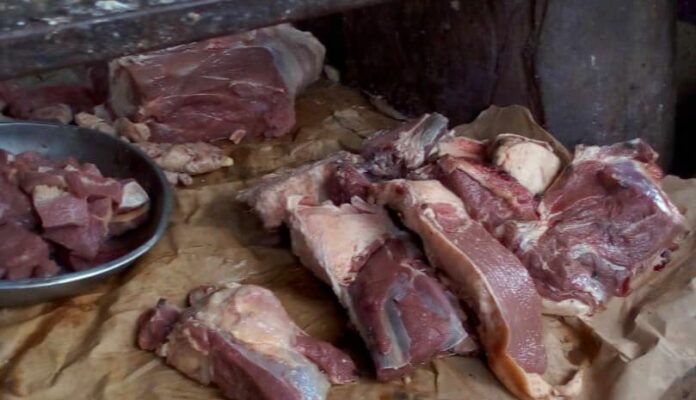 Butchers and meat sellers have told The Fatu Network that since incidents of arrest were reported in connection to the smuggling of dog meat into the market, consumers have been feeling reluctant to buy meat. According to most of the meat dealers in Abuko and Tabokoto, there has been a decline in their income and profit as only a handful of customers buy meat now.

The butchery business is a profitable and highly rewarding and lucrative business, providing income for thousands of businesspersons.

“I have many customers, especially during weekends. People used to buy meat in abundance to grill but now before they buy, they observe very well to be sure that dog meat is not mixed in,” Njaga Barry said.

Abuko is a famous meat market for cattle beef which is often displayed at canteens on the highway.

Lamin Sowe buys meat and grills it for sale which passengers on stopover buy as a takeaway.

“I cannot rush at passengers in vehicles and convince them to buy. Some try to smell because they are afraid of dog meat. Some will just buy with faith.”

“Dog meat has too much fat and it’s easier to detect it. I only deal in cattle meat.” Samba Boye, a butcher in Abuko stressed.

The butchers and meat vendors described the arrest of people attempting to sell dog meat as isolated incidents.

“One rotten potato spoiled the whole bag. I have been dealing in clean meat sales for 10 years now and never received any complaints from my customers,” Lamin Fatty said.

Meat is a great source of protein. It also provides lots of other nutrients your body needs, like iodine, iron, zinc, vitamins (especially B12) and essential fatty acids. So, it’s a good idea to eat meat every week as part of your balanced diet.

“There is no open dog meat market in the Gambia. I have customers all over the country. Recently, I opened a new outlet in Farafenni. Generally, the meat we are selling is fit for human consumption,” Bai Joof said.

Babucarr Manneh attributed their low sales to fake news circulating that dog meat is rampant in the market.

“I don’t deny the fact that someone is arrested with dog meat, but this act is not the general behaviour of the entire meat dealers.”

Fake news has negatively impacted the meat business as it spread widely and fast. Poor sales performance costs money, time, resources and missed opportunity, and the very worst part is that you’re most likely contributing to your competitor’s growth.

According to health experts, the risks associated with eating dog meat are real. Dog meat might contain parasitic worms, like the infamous Toxocara canis, which can result in blindness, myocarditis and respiratory failure. Rabies is another legitimate concern. People should be aware that dogs of any age, including puppies, can sometimes carry harmful germs that can make people sick. Germs from dogs can cause a variety of illnesses, from minor skin infections to serious illnesses.