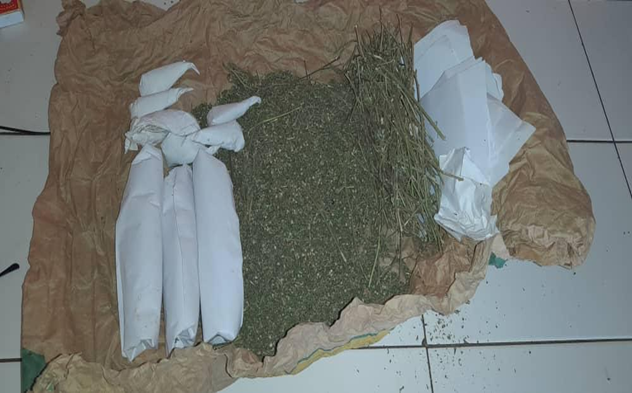 The Drug Law Enforcement Agency of The Gambia (DLEAG) has made several arrests in the Kanifing Municipality in connection with possession of prohibited drugs and also for obstruction of DLEAG’s operatives from performing their duty.

DLEAG apprehended seven (7) persons for obstructing their operatives and willfull damage to property. The suspects were said to be involved in the stoning and obstruction of the operatives when one Ablie Demba was arrested on Saturday 22 January 2022 at Tallinding Sicap. The patrol team indicated that Ablie was taken into custody after operatives discovered seventeen (17) parcels and one hundred and seventeen (117) wraps of suspected cannabis sativa wrapped with white papers and concealed in multi colour nylon bags in a specific compound in Tallinding Sicap.

The suspect Ablie Demba then started shouting, creating commotion and calling for his people not to let the officers take him into custody. This resulted into a serious confrontation as those he sought help from obstructed the officers and insisted that he will not be arrested. Some started throwing stones at the patrol team resulting to the vandalisation of the windscreen of one of the patrol vehicles.

All seven suspects identified to be involved in the obstruction alongside Ablie Demba and another suspect (Lamin Sanneh) earlier arrested in the same compound with 13 kg 400 grams  of suspected cannabis sativa were arraigned in court and remanded accordingly.

It is however disappointing and disheartening that people especially relatives will be aware about their kinsmen involvement in illicit activities and wouldn’t make any effort to address it. On the contrary, they will do everything humanly possible to ensure that such people are shielded and not brought to book. We must understand that it is our collective responsibility to ensure that our societies are safe and secure.

We are loosing youths with high potentials and prospects to drugs. Youths as young as 12 years old sit in joints within our communities abusing drugs all day long. No one dare address them for fear of the disrespect they will receive from them. The agency continues to receive countless number of complains and reports from the public regarding drug related activities and open drug abuse.  It is our expectation that if we embark on implementing control measures to abate this menace, all meaningful and sincere Gambians and residents should support us and not the contrary.

We assure the populace that we will not be distracted in fulfilling our mandate as provided for in law. We will employ all lawful means to ensure that our communities are safe and drug free so that our youths can grow to realize their potentials.

We also use this opportunity to remind heads of households and those concerned in the Management of premises that it is an offense to knowingly permit drug related activities in their premises.

Section 40 subsection 2 further provides that except proven otherwise, anyone found engaged in drug related activities on any premise shall be presumed to have been permitted by the person, persons or entity concerned in the management of such premise or premises.

On that note, we call on them to be alert and vigilant. Henceforth, the agency shall strictly apply this provision for those arrested in places notorious for the dealing or open abuse of drugs. And unless the contrary is proven by investigations, charges will be preferred accordingly.

In a similar but separate development, DLEAG’s Kanifing Field Station arrested one Yankuba Jammeh, an adult male Gambian National on the 22 January 2022 With eleven (11) bundles and thirty one (31) wraps of suspected cannabis sativa in Lamin (WCR).

DLEAG’s Sanyang Field Station arrested one Ebrima Barry, an adult male Gambian and a resident of Jabang Layout with one (1) bundle and two (2) wraps of suspected cannabis sativa. He was arrested on the 23 January 2022 around 18:25 GMT onwards at Jabang Layout

The duo were nabbed on the 19 January 2022 around 13:30 GMT onwards at Jareng village with three (3) parcels and six (6) wraps of suspected cannabis sativa.