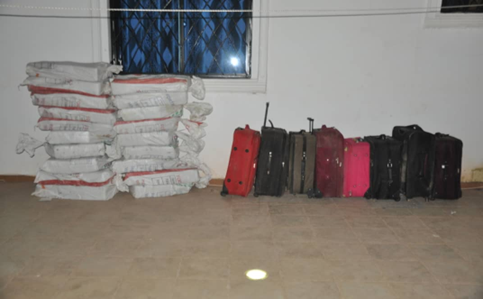 Operatives of the Drug Law Enforcement Agency The Gambia (DLEAG) attached to the Kanifing Municipal Command, have confirmed the seizure of seven hundred and thirty-four (734) blocks of a substance believed to be Cocaine on 28 September 2022.

In a statement obtained by this medium, Ousman Saidybah, the Public Relations Officer of the Drug Law Enforcement, said preliminary test conducted by their forensic experts suggests that the blocks are cocaine positive.

“The seizure is the result of a well-coordinated high-profile intelligence-led tactical operation starting with an initial seizure of one block at West Field Junction, followed by the seizure of forty-four blocks and subsequently, six hundred and eighty-nine blocks were discovered in a store inside a private residence located near Paradise View in Salagi, Kombo North District, West Coast region,” he explained.

Mr. Saidybah further disclosed that the three of the Sierra Leoneans are staying in one compound which is responsible for Omar Fofana, but he does not live there.

“The Director General immediately commissioned a comprehensive and detailed investigation into the case with due compliance with rule of law and human rights standards,” he added.

Officials of the agency said they will continue to work closely with all national stakeholders and international partners to consolidate this achievement and hold perpetrators to criminal accountability.

“Amidst a desperate disinformation campaign against the Agency by groups and individuals who are serving nothing but the interest of criminals and criminal organizations, the Agency remained focused and resolute in discharging our mandate.

This seizure is yet another demonstration of our capacity, resolve, and commitment to the fight against transnational drug trafficking. We are untethered in ensuring that The Gambia remain a hostile ground for drug traffickers, and no amount of intentional distraction will wither us from this path.”

The agency called on people to cooperate and support their investigation, and further invite residents of the Gambia to share with the Agency any information that may come their way regarding drug trafficking activities in the country.

“We acknowledge that the fight against drugs is a shared and collective responsibility, and no amount of law enforcement effectiveness can deliver the desired goal without community cooperation and support,” the agency noted.

Meanwhile, the Board, Management and Staff commend have congratulated the officers of the KM Command for this remarkable performance and reiterate their commitment to fighting the use and sells of illicit drugs.