December Election: The Candidates who might not qualify to run 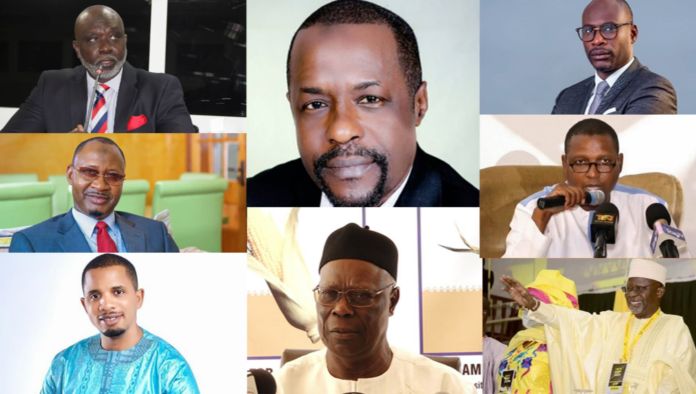 The December presidential election is now just weeks away but the past months have seen over two dozen Gambians express interest in the country’s top job. The new boys who stepped forward will certainly go to war with a number of the old guard along with President Adama Barrow who is set to defend his seat.

However whether some of the candidates will qualify to run in the election remains very much in doubt. Below are nine candidates who may not end up not meeting the criteria to run…

UDP leader Ousainou Darboe has more than two decades under his belt as a politician. He was former President Yahya Jammeh’s biggest nemesis during the former dictator’s 22 years rule. UDP has tapped Mr Darboe as their standard-bearer for the job but whether the 73-year-old will qualify has been a subject of much debate. There is yet to be any clear verdict regarding the politician’s conviction, his sacking from public office as well as the issue of tax evasion.

Essa Faal has managed to become the surprise package among the candidates seeking the presidency. Since announcing his presidency bid at the end of August, the man has quickly won the hearts of a lot of voters. But whether he is qualified to run remains unclear. It’s said he doesn’t meet the five years residency requirement. There are also reports the Turnaround advocate holds citizenship of both The Gambia and Senegal.

Mai Ahmad Fatty is another candidate who wants to be president of The Gambia in December. However, the GMC leader may not be in a position to qualify if his sacking from public office is anything to go by.

CA leader Dr Ismaila Ceesay is another new boy who wants the job of president. The 46-year-old worked as a political science lecturer at the University of The Gambia for more than a decade. He became leader of CA this year following the formation of the party. Ceesay is said to be a citizen of both The Gambia and Sweden and this could present a problem for him at nomination.

BB Darbo is one of the candidates who is relying on his experience to take State House. He served as finance minister as well as vice president in previous governments. He became leader of Gambia For All following his unceremonious departure from PPP. He is said to be a citizen of the United Kingdom, and if this is true, ‘Demba is OK’ may not qualify to run.

Sheikh Tijan Hydara has all of a sudden become a key force to reckon with. This is a man who was until recently struggling in terms of support from even his hometown, Brufut. But the decision by former President Yahya Jammeh not to work with NPP has seen a lot of APRC supporters flock to the Gambia Alliance for National Unity leader. But Mr Hydara is said to have been sacked from public office and this could present a problem for him at nomination.

Tamsir Jasseh is another citizen who is interested in taking State House in December. The Our Homeland leader may not qualify if his conviction for treason is anything to go by.

Papa Faal announced his presidency bid in November last year but his campaign has been largely lifeless. He is a US citizen and that could get in the way if he should go to Election House on October 30.

Civil Democratic Party leader Dr Amadou Kanteh announced his bid for the presidency way back in 2019. His campaign has however struggled and the fact that he has not been able to even register his party is a grim indictment. The Bwiam native is however a US citizen and that could see him denied a spot in the December election.