Dalaba Estate Residents: ‘Our families abroad empty their savings to comfort us, we are not rich as thieves perceive’ 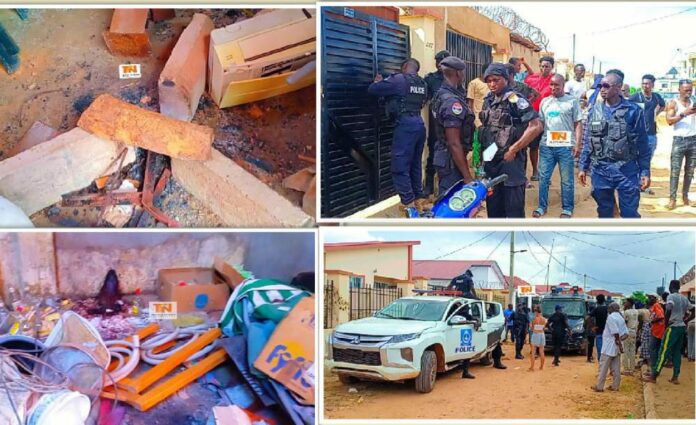 Residents of the criminally targeted neighbourhood of Dalaba Estate disclosed to the Fatu Network that their families abroad empty their savings to comfort them, and they are not rich as thieves perceived.

Residents say they also struggle to earn a living pointing out that to shelter in an expensive house doesn’t depict a flamboyant lifestyle.

Police say following their raid, nine young Nigerian nationals and one Gambian lady were arrested, all of whom are between the ages of 18 and 30.

Several residents, mostly elderly women, are devastated and shocked by the recent theft and robberies by people residing in their estate.

People living in an expensive house are often perceived to be wealthy but according to the information we gathered, it’s just a general notion that doesn’t reflect their realities.

“This is frightening, we are staying with criminals in the same neighbourhood who are not visible during the daytime. They only move at night. We are not safe and need security. This is a havoc and government must address our lamentations,” Fatou Jobe asserted.

Fatou John another resident whose son abroad bought a compound for her says this unfortunate situation of rampant theft and robberies is causing economic loss.

“You buy your compound for comfort, and you are not safe, we need security in our estate,” She applied.

For Anty Awa Mbergan, this situation is disturbing and is making her sleepless. “We cannot sleep at night, we are really disturbed after spending a lot of money, your life is still in a mess.”

Aja Bajen Jagne described the incidents as worrisome and needing to be urgently addressed.

“We are staying with all kinds of people; they speak languages no one understands and distance themselves from the people. We don’t have peace of mind because security is still a challenge for us,” She said.

Other residents who spoke to this medium prefer to hide their identities for security concerns but made a unified request for security to be vigilant and sensitive to criminal activities within their estate.

Mustapha Njie, CEO of TAF Africa Global and the developer of the Dalaba Estate has reacted to the recent arrest of suspected criminals believed to be responsible for the many robberies and break-ins within the estate.

“We are not the owners of Dalaba Estate but the developers. The estate is sold out and every property is handed over to the rightful owner. They have options of renting it out or living there. This particular house was rented out to this gang by the rightful owner. We regret that this is happening in The Gambia and would advise property owners to conduct proper due diligence before renting their properties to tenants.” He clarified.

A preliminary investigation by the police led to a massive recovery of different items which includes cases of clothes and shoes, laptops, a generator, bags, mobile phones, cutlasses, and other valuables.

As investigations into this incident progress, the police say the general public is once again reassured of their commitment to ensuring the lives and prosperities of all Gambian and residents are safe.

Police PRO Binta Njie when contacted says the Dalaba Estate is hot spot and police will intensify their patrols around the vicinity.