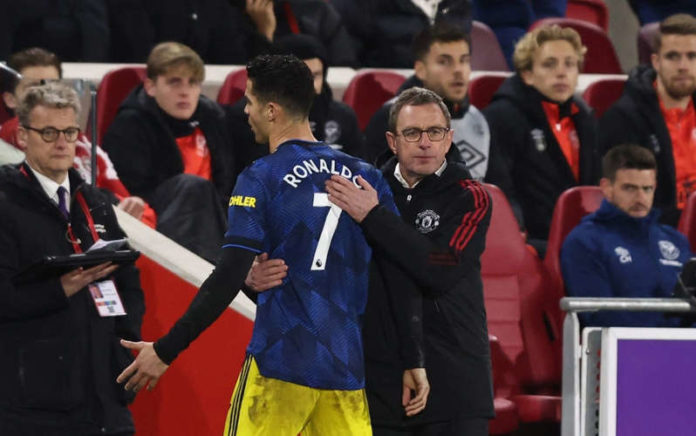 Cristiano Ronaldo demanded to know why he had been substituted – and not one of Manchester United’s younger players – in his pitchside moan during the 3-1 win at Brentford.

Ronaldo, 36, was upset at being taken off during the win in west London on Wednesday night and now Rangnick has revealed what was said between the pair.

“Cristiano is a prolific goal scorer and a player who always wants to play and score goals. He was also asking ‘why me not one of the younger players?’” said Rangnick.

Marcus Rashford, 24, scored United’s third soon after replacing Ronaldo, who has since suffered a neck injury and is now a doubt for Saturday’s game with West Ham. Mason Greenwood and Anthony Elanga had earlier given the visitors a 2-0 lead at the Brentford Community Stadium.

“The answer came five minutes later when one of the younger players scored the third goal,” Rangnick added.

“Maybe Cristiano could also have scored that goal but football is not always ‘maybe’, it’s about making a decision in the right moment. Until then we were 2-0 up, Cristiano made an assist for the second goal.

“He has not been substituted, I believe, for the first time in his career. There have been a few other substitutions as far as I know, even under Sir Alex. A player like Cristiano doesn’t like to be substituted, that is pretty normal. His reaction was emotional but for me, not a problem at all.”