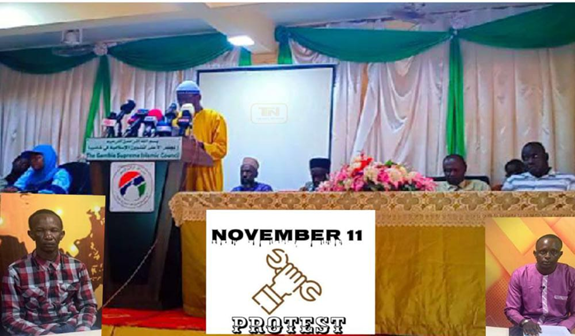 A pressure group dubbed ‘Coalition of Progressive Gambians’ has on Wednesday 9th October 2022 cancelled their scheduled November 11 protest; instead, they will now embark on dialogue with the government after series of consultations with Supreme Islamic Council and other bodies.

“…the general public is hereby informed, the planned November 11, 2022 peaceful demonstration is postponed with the commitment to continue the dialogue between the two parties,” a joint statement of the pressure group, Supreme Islamic Council and different government institutions reads.

‘Coalition of Progressive Gambians’ planned to embark on a nationwide protest demanding the government to address the high cost of living, promote transparency amongst others.

Another group called ‘Gambia for five years’ had since reached to the Coalition’s plan. They said in a statement that they would also take to the streets on November 12 to counter planned November 11 demonstration as they believe all the countries are facing hardship.

The Supreme Islamic Council (SIC), who were the main mediator said they were concerned about the group’s plan of conducting the demonstration throughout the country which was why they intervened to solve the problem.

“Their demands are important; but demonstration is not the only means to solve it. It can be solved through dialogue and consultation,” Supreme Islamic Council’s President, Essa Darboe told journalists in a press conference at SIC headquarters.

A meeting of Coalition of Progressive Gambians’, SIC, Peace Network and government institutions such as the Ministry of Interior, Office of the IGP, Ministry of Information and others revealed there was consensus on two points.

The first one was assurance given by the government that they are willing to dialogue with the pressure group and the second one was that the SIC and Peace Network would continue being the mediators between the coalition and the government.

Gambia gets poorer: Poverty rate surges to 53.4 per cent

‘He turned our honourable office into a brothel’, UDP’s Yanks accuses...

‘We realised 95% of the kids that died are from flooded...