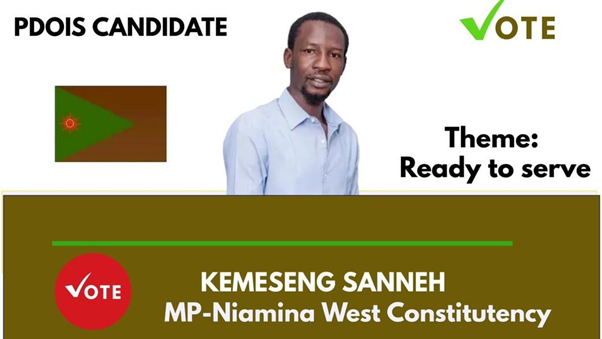 Citizen journalist and PDOIS stalwart Kexx Sanneh has launched his bid to contest the forthcoming National Assembly Election in April 2022. Kexx Sanneh will be contesting the Niamina West Constituency seat under the ticket of the People’s Democratic Organization for Independence and Socialism (PDOIS) Party. Sanneh in an official Facebook message revealed to his followers that his candidacy has been approved by the Party following his application to the Party’s Regional Coordinator.

‘’Following my application to the Regional Coordinator of my party, the PDOIS, expressing my interest to contest for the seat of National Assembly Member for Niamina West Constituency, the party has finally endorsed my candidacy. Fellow citizens, by this notice, I hereby offer myself to the people of Niamina West Constituency as their candidate for the 2022 Parliamentary Election.’’

According to Sanneh the country must do away with a rubberstamp parliament and elect people who must be prepared to speak truth to power.

‘’The Parliament needs representatives that are bold enough to speak truth to power, and patriotic enough to always put personal interest behind and put forward the national interest for our collective progress. Like my party and its Members of Parliament have proven over the past five years, there is absolutely no doubt that I will always put the interest of our beloved country ahead,’’ he said.

‘’I am ready to execute my social contract duties between my country, its people and I. I am convinced, at least at a personal level, that I have the knowledge, ability, and experience to represent the people of Niamina West and The Gambia at large,’’ he said.

‘’To state for history and future references; I do not intend to go to the Parliament because of personal rewards, the title or privileges attached to it, but to be part of the crucial task of serving the Gambians, and shaping my society through the enactment of laws, ratification of agreement, approval or disapproval of loans and grant and holding government accountable to and for the people in the SUPREME of our NOBLE NATION.’’