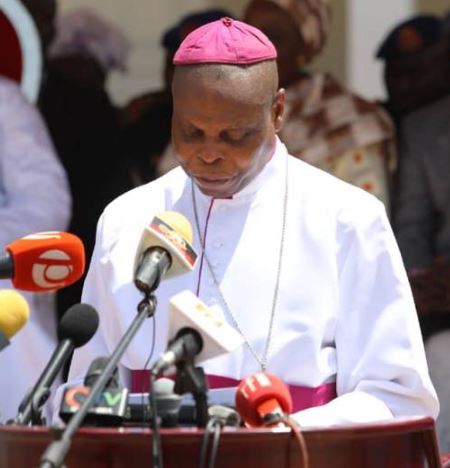 The draft constitution has plunged The Gambia into even greater chaos as regards religious tolerance and it is having the effect of polarising rather than unifying us as a nation, the Gambia Christian Council has claimed.

Christian Gambians have since the start of a new constitution building process last year been pushing for total protection of their rights; laying special emphasis on the use of ‘secular’ in any new constitution for The Gambia. They were however left disappointed after the word was overlooked.

The final draft of the document is now heading to the national assembly after it was submitted to President Adama Barrow in March. A referendum is expected to take place next year.

The Gambia Christian Council said forthrightly in a statement: “The 2020 Draft Constitution presented by the Constitutional Review Commission (CRC) for approval by the Executive and National Assembly of The Gambia in our considered opinion still falls short of protecting Christian religious rights.

“Apart from the text of the draft itself which allows for more than a single interoperation on this issue the primary concern of the Christian Community is driven by the reality of its experiences during the Jammeh era. The Christian community wishes to ensure that its rights as a minority religion are protected in the said Constitution.

“For more than 20 years, we have watched helplessly as the government openly encouraged and permitted the construction of mosques in government institutions, at the expense of other religions, including Christianity and in a country which the government was not permitted to prefer any one religion over another.

“Arabic inscriptions were placed over government offices and the dress code of female students in schools was altered to require schoolgirls and women functionaries to wear the Hijab in public as their peers are obliged to do in Arab Islamic countries.

“The overwhelming feedback from a large section of the population is that they want a Gambia where both Christians and Muslims continue to coexist in peace and good neighbourliness as they have for generations.

“This generational legacy of religious tolerance and mutual coexistence however, is now under a real threat ironically because of the 2020 Draft Constitution. Instead of marking a return to order and the rule of law, the adopted text of the Constitution has plunged The Gambia into even greater chaos as regards religious tolerance. It is having the effect of polarising rather unifying us as a nation.

“The new Constitution has for the first time since The Gambia became an independent country created a parallel legal system to the common law system, this is the Shari’ah legal system.

“The Constitution makes it mandatory for the majority of the Gambian people to be subject to Shari’ah law in matters of marriage, burial, inheritance, adoption, endowments, all the key areas of human life.

“We acknowledge that the CRC has incorporated in its final draft some of the changes proposed by the Gambia Christian Council, and the Interfaith Group.

“So we thank the CRC for listening and hearing some of the concerns of the Christian community and are satisfied that the new Constitution ensures that: 1. 1. The State will not show preferential treatment to any citizen on account of his or her religion and shall treat all citizens equally as detailed in Section1 (3) (page 2), Section12 (2) (b) (page 6) and Section 69 (6) (page 29); 2. 2. The State shall respect and protect the rights of every person to hold, promote and exercise our beliefs, refer to Section 49 (1-4) (page 24); 3. 3. No State religion is created whether by the National Assembly or President as recorded in Section153 (2) (b) (page 71) and Section 88 (5) (b) (page 40).

“Nonetheless we are concerned that Christians may be subject to the Shariah High Court as the Constitution submitted to the President unlike the 1997 Constitution has used a very vague term rather than the clear language that is required on this issue. Section 188 of the Draft Constitution gives the Shari’ah High Court jurisdiction “amongst people who are subject to Shari’ah in that regard ”. Not only is this subjective but also opens room for conflict as Christians CANNOT be subject to Shari’ah law in any area including the matters of marriage, burial, inheritance, adoption and endowments.

“The Gambia Christian Council is therefore requesting that the President, Cabinet Ministers and National Assembly Members intervene to correct what we believe could only have been an oversight on the part of the drafters by inserting wording which leaves no room for any doubt that Shari’ah applies only to Muslims and that it is not intended to apply to NonMuslims.

“The Gambia Christian Council acknowledges the support and encouragement of the vast majority of Muslims in particular members of the Interfaith Group during a difficult phase of the public consultation process. We pray that we “all may continue to live in unity, freedom and peace each day” as it says in our National Anthem as we strive to move closer to the Gambia we all want.”