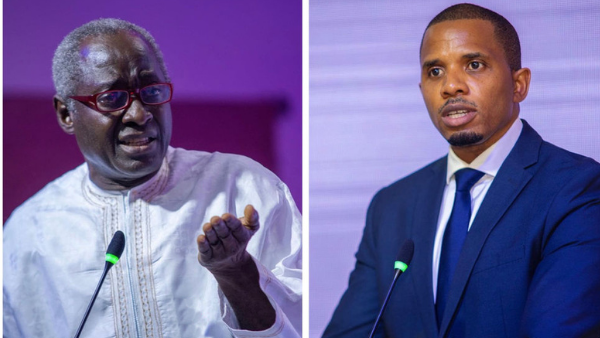 CA leader Dr Ismaila Ceesay has called on Halifa Sallah and his PDOIS party to change their system before seeking system change, going after the party in extraordinary fashion.

The respected political mind fired back that Mr Sallah said his party will not give credence to press releases that emanate from certain parties and personalities. CA had issued a statement saying PDOIS were invited for coalition talks but they never responded.

At a news conference on Thursday, Mr Sallah said: “We have seen certain statements issued. We believe that those issuing the statement may not be doing so in an official capacity. What we anticipate is that the people meet to form a coalition, then they will have a secretariat which will issue press releases on their behalf.

“We do not expect separate people to be issuing press releases. That’s why we cannot give importance to press releases issued by certain parties and personalities. What we will give credence to is what is issued by a group of people who officially declared themselves to be working to build a coalition.

“But it is important for the sake transparency and accountability to explain to all of you that prior to my ailment, I have been approached by people who felt that CA and PDOIS should form a coalition. Whether those people were sent by their leaders or not but what we were told is that CA is a young party and would want to support PDOIS in this presidential election, so that through this association it would build itself.

“But that CA was also talking with other parties and they wanted PDOIS to engage in that. We told them that coalition building is very sensitive. You need to talk to each party to know their interest. Because we do not want to sit and each party will say select my presidential candidate otherwise I will not be part of the coalition.”

Dr Ismaila Ceesay reacted by saying PDOIS always wanted to be answered when they call but do not answer when they are called.

He wrote: “Change your System before you call for System Change. You want to be answered when you call; but you don’t want to answer when called. Things don’t work like that.

“If, for 35 years, you are not able to transform your party into a modern political organization, how can you transform The Gambia into a modern state in 5 years? We are on a mission to save the next generation from the failures of the past and we can’t afford to be distracted.”