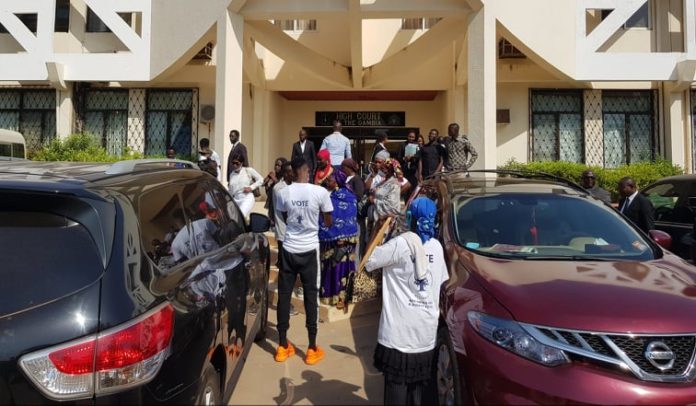 By Lamin Njie and Christian Conteh

Judge Amina Saho-Ceesay on Tuesday dismissed the prayer of the Independent Electoral Commission for a ‘short’ adjournment of hearing in the case involving Election House and Citizens’ Alliance.

Citizens’ Alliance has sued the IEC at the high court over Election House’s rejection of its nomination. The IEC said CA could not collect 200 signatures from Banjul in line with the law around nomination signatures.

On Tuesday, the case came up at the high court in Banjul presided over by top judge Amina Saho-Ceesay.

Kebba Sanyang, representing the IEC began by saying Election House ‘vehemently’ opposes the lawsuit against it by CA. He then prayed for a short adjournment of the matter so they could prepare themselves.

However, experienced attorney Chris Mene rejected the application insisting the case needed to be treated with urgency taking into account the presidential election which is only two weeks away.

“We vehemently oppose the adjournment of this matter because my learned colleague knows was a pressing urgency having regard to the fact presidential election is scheduled for a little over two weeks time,” Mene said.

“Time is of the essence,” he insisted elsewhere. He also said the respondent was served since last Friday and had all weekend to file any affidavit if they so wished. Mene then asked the court to proceed as scheduled.

“The IEC is not a government department as in their name ‘independent’. [It’s] not an agency of government and its independence is recognized by the constitution. But that does not preclude the AG (Attorney General) from applying to join this matter if they so pleases,” Mene who equipped himself with two other lawyers said.

Independent Electoral Commission’s attorney Kebba Sanyang insisted that while IEC’s name implies independence, it is a creation of the constitution – a constitution that operates throughout The Gambia.

“Its decisions, policies, programmes [and] activities affect all within the country and that is why it is mandated by law to organize public elections and referendum. And to say the Attorney General has nothing to do with the IEC as my learned friend’s submission suggests… We believe that the AG is a necessary [party] because he is the principal legal adviser to the government of The Gambia,” Sanyang countered.

Mene took offence at the charge that he was suggesting the attorney general has nothing to do with the IEC.

“I never said what my learned friend ascribed to me. I said if the AG wishes to join, he can apply to join. I said the action was properly constituted without the AG but if the AG wants he can intervene,” Mene fired back.

The judge in her ruling ruled that the Independent Electoral Commission is part of the public service and ordered that the attorney general be joined in the matter.

The case returns on Wednesday.