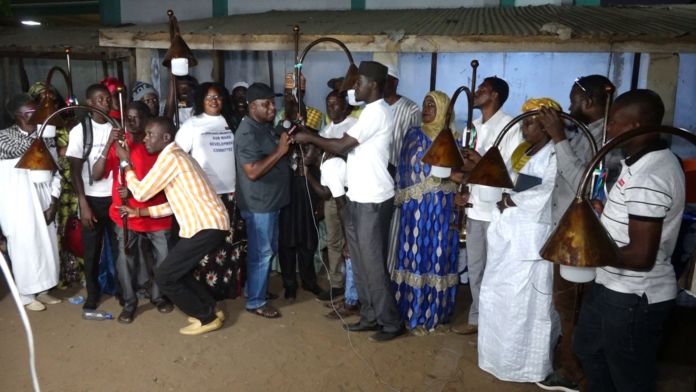 Hundreds of locals in Bundung – Mauritani Six Junction on Sunday gathered to witness the launching of a community lightening project.

The project which began last year by targeting cemeteries, has now been expanded to homes, where nearly 2000 home gates have been reached. It seeks to curtail illegal activities such as stealing.

The locals also witnessed the inauguration of a dozen light bulbs at Bundung car park. The project is a community initiative spearheaded by ward councilor Sulayman Jammeh with financial support from philanthropists.

Speaking to The Fatu Network in an exclusive interview shortly after the launch, ward councilor Sulayman Jammeh said: “We are trying to expand this beyond Bundung. The world is moving and we don’t expect to be living in dark environment, because in our Bundung here some of the places are very remote.

“And nowadays, we have so many things that are not normal. We have some criminals around. And we expect by putting some of these things here will definitely ease some of those illegal activities.”

The spokesman for Bundung car park Jabel Choi lauded the gesture saying for over 22 years they haven’t got such benefit.

“This project has cut down the rate of stealing in this car park,” he said.