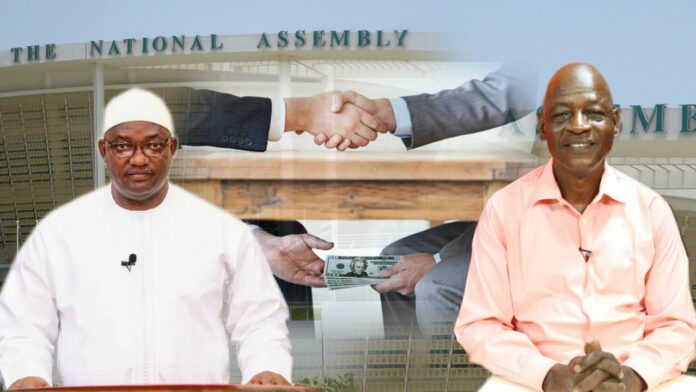 Honourable Madi Ceesay, veteran journalist and United Democratic Party (UDP) National Assembly Member (NAM) for Serrekunda West Constituency, has described statements from President Adama Barrow’s State of the Nation Addresses (SONA) as “bogus” and referred to him as the “chief” of a “camp that is made of corrupt people”.

The NAM, who is on his second term in Parliament, was answering a question about another NAM, believed to be a staunch supporter of the President, who said in Parliament that Police should be encouraged to take bribes.

“It is disappointing but then it is also not disappointing because it is coming from a camp that is made of corrupt people; that is the NPP, and the chief is the President.

I will tell you why I said the President. As we speak now, we have imprest amounting to 31.7 million dalasis that is pocketed by people. It is not members of his government that took that imprest, this was before he came but where I am holding him responsible… that president now is gone, and people have now given him mandate to man the affairs of this country and he has found those records there. For six years now his government has done nothing about recovering that 31.7 million.

All that was recovered is 2.5 million or around that, but then the outstanding is now 29.7 million. So, if a NAM should say that Police should be encouraged to take bribes, it is disappointing, very disappointing,” he admitted.

Madi further said corruption is the cancer derailing the country while noting the Speaker of the National Assembly should have asked the NAM to withdraw his statement.

“In fact, corruption is really what is bringing the Gambia down. So, on the floor of the National Assembly, if I were the Speaker, I would have asked that NAM to withdraw his statement because that is not good to be on the records coming from Parliament. But then, like I said, I am not disappointed too because you look at where he is coming from.”

When asked why he has not been attending the President’s State of the Nation Addresses for four consecutive years, Madi said: “Because his statements are bogus, that’s all”.

Share
Facebook
Twitter
WhatsApp
Linkedin
Viber
Previous articleIt’s Either Government Intervened Or ‘We Will Go And Demolish All Those Structures And That Will Lead To Chaos’
Next articleScrambling For Per Diem: Farmers Platform Discloses Discontent Over Per Diem-Seeking Representatives At Overseas Platforms