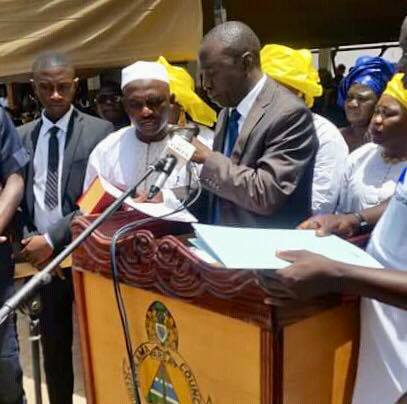 The newly elected chairman of The Brikama Area Council (BAC), Sheriffo Sonko and twenty-eight (28) other Ward Councillors were Wednesday, May 16 sworn-in to office at the West Coast Region.

Sheriffo Sonko, a former driver at a local bank won the mayoral elections through a UDP ticket.

The swearing-in ceremony brought together hundreds of supporters and families of those elected to witness what many called a remarkable event.

Chairman Sonko’s swearing-in was administered by the West Coast Region’s Governor, Bakary Sanyang while the Councillors were sworn-in by Sait Jallow, CEO of Brikama Area Council.

The Vice Chairman was selected amongst the elected councillors in which the UDP Councillor for Suba Ward, Cherno Ismaila Jallow won against his counterpart Lamin Jarju, APRC Councillor for Marakissa Ward.

Meanwhile, the Council is expect to nominate four representatives from the Chiefs, Women, Youth and Business Communities.