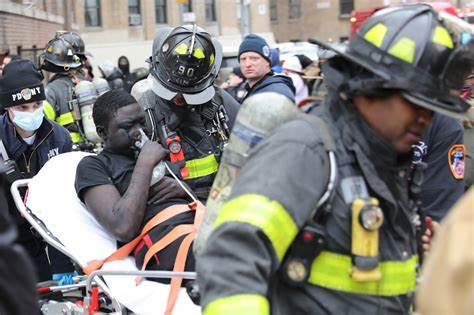 At least three Gambian including two children were among 19 people confirmed dead on Sunday in one of New York’s Bronx neighbourhood’s deadliest fire incidents.

The cause of the fire is being investigated by New York city authorities, but US media reports say Choking, blinding smoke trapped many of the victims of the five-alarm blaze, which was blamed on a malfunctioning space heater turned on to help ward off the cold temps outside.

The incident at the high-rise Bronx apartment fire that killed at least 19 people, including nine children originated in a duplex on the second and third floors of the building but never extended past the unit and the hallway nearest the apartment, FDNY Commissioner Dan Nigro told US Media.

Smoke generated from the duplex blaze was able to filter out through an open door and spread throughout the 19-story structure, he explained.

“The door to that apartment unfortunately when the residents left was left open, it did not close by itself. The smoke spread throughout the building, thus the tremendous loss of life,” Nigro said at an evening press briefing.

” Our community witnessed a tragedy in the Fordham Heights section of the Bronx. A 5-alarm fire destroyed the homes of many of our GYO community members at 333 East 183rd Street. At the moment, at least 19 people have been pronounced dead, including young children, and dozens of others have sustained life-threatening injuries.

We ask that you help us support the victims of this tragedy. All proceeds will be distributed to the families by the Gambian youth organization (GYO) ‘ A Go Fund Me account created by one Salim Drammeh of Gambian Youth Organisation in the Bronx meant to support the Gambian victims of the fire disaster stated.