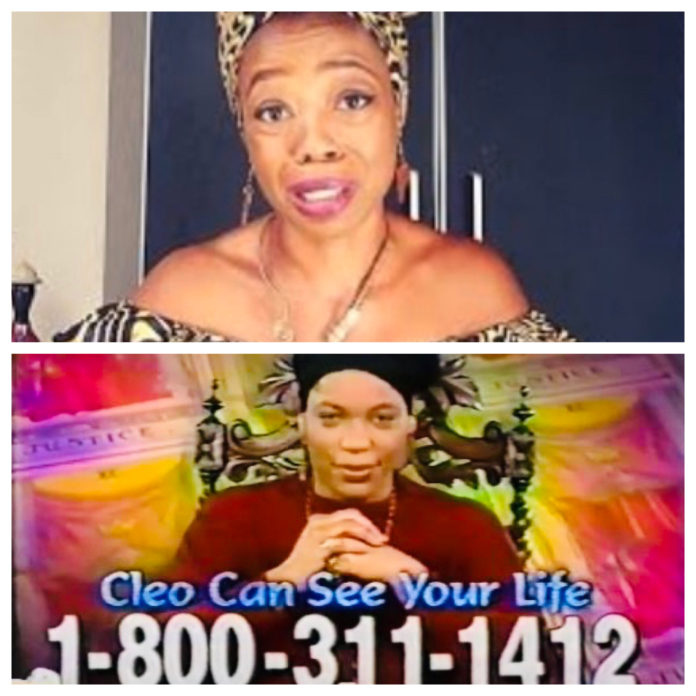 Youree Dell Harris was an American television personality best known as Miss Cleo, a spokeswoman for a psychic pay-per-call service called Psychic Readers Network from 1997 to 2003. She used various aliases, including Cleomili Harris and Youree Perris. She was born in Los Angeles and worked for Psychic Readers Network under the name Cleo. She claimed to be a mystical witch doctor from Jamaica. Her last project, Super Club Cafe, failed in 1997, and she left town with a trail of debts and broken promises” according to the Seattle Post-Intelligencer. She told her cast members she had “bone cancer” and her medical costs would prevent her from paying people immediately. In 2002, the Federal Trade Commission charged the company’s owners and Cleo’s promoters in ten states. They had defrauded victims an estimated $1 billion. A settlement was reached to erasing $500 million of debt owed by its victims to the Network and paid a $5 million fine. Basically, Youree Dell Harris aka Clemili aka Youree Parris aka Miss Cleo, was nothing but a BIG FRAUD.

Art Cathey is an eccentric American woman from the boonies of Alabama and now living in The Gambia and claims to be a Holistic Counselor, Grant Writer, Ancestral Matchmaker, Urban Astrologer, Wife and a New Mom Free Spirit. After living in Gambia for a few months, she has now declared herself to be Gambia’s “New Master”. These are her exact words “y’all like your old master and you don’t want a new master.” She said her mission is to help other blacks in the diaspora repatriate back to Africa. According to Art Cathey, she will teach them how to invest in Africa, how to relocate to Africa, and help them with the mindset adjustment they need to make African holistic health. And she offers them a no cost consultation on how to change their lives for the better. As a Holistic Practitioner, Art Cathey promises optimal spiritual, mental and physical health. And as an Urban Astrologer, she can use the stars, the moon and the annual location of space rocks to predict and explain peoples lives, just like the original Miss Cleo. Urban Astrologer are usually idiots who have no understanding of physics and how the other planets do not change the outcome of events.

Now that the similarities between Miss Cleo and Art Cathey have been established, I will be referring to Art Cathey as “Miss Cleo Alabama” going forward in this piece. Since moving to Gambia, Miss Cleo Alabama has been claiming that she is the “New Master” and there to take over and develop the country, and that Gambians are perfect slaves. In virtually all her videos on her YouTube channel, Miss Cleo Alabama is constantly insulting Gambians and everything Gambian. She said she is in Gambia to claim what belongs to her. Miss Cleo Alabama terms Gambians as Afri-coon and calls them slow, docile, dirty, and the list goes on. (The word “coon” is an extremely contemptuous term used to insult a black person. It also means an undignified person). This is what Miss Cleo Alabama is telling her audience in her videos and asking them to share, share and share. This is the same audience, she is trying to relocate to Gambia and help them invest in real estate and change their lives for the better. Miss Cleo Alabama tells them that Gambia is cheap, and they can have a fabulous house and live LARGE for $300 a month and can even run around naked if they want to. In just the few months she has lived in Gambia, Miss Cleo Alabama sells herself as a business and housing expert in the Gambia and holds webinars for her potential clients.

Now living in Gambia, Miss Cleo Alabama seems surprised to see white people there and tends to have an emotional meltdown at the sight of a white person. She said the Afri-coons still love their “Old Masters” and she is there to change that as the “New Master”.  In her delusional mind, Miss Cleo Alabama is in Gambia to save Gambians from their “Old Master”. In one of her videos, Miss Cleo Alabama describes an incident that took place during her trip to the ATM, when she saw a “weird-looking” white man who was pulling back a little Gambian girl who was attempting to enter the ATM area. According to Miss Cleo Alabama, her “pedophilia radar went off” and she immediately started questioning the girl and recording the encounter with her camera. Then a Gambian man showed up and identify himself and the girl’s father and told her that the white man was a family friend and they were all together. Any sensible person should have known their place and respect that. But not Miss Cleo Alabama, she got confrontational with the father and in her video, referred to the father as a sorry Afri-coon who was pimping his little girl to the white man. And mind you, Miss Cleo Alabama has zero evidence of any wrongdoing, but she went ahead and made that serious allegation against the girl’s father to her audience.

Pedophilia is a problem around the world, and I would encourage every decent human being to fight it, but it must be done within the confines of the law. One cannot just work around and start confronting people, especially when there is zero evidence. I can understand if Miss Cleo Alabama had found the white man with the little girl in a dark corner somewhere, but this incident was in broad daylight and at an ATM. I bet Miss Cleo will call my argument here “deflection”, she is quick at that when challenged. Then again, Miss Cleo nervousness may have been born out of her own personal experiences as a child, and that’s understandable, but it still doesn’t warrant confronting people in broad daylight with zero evidence. Pedophilia is a huge problem in the United states, especially, thirty to forty years ago.   Miss Cleo also talks about sex tourism in the Gambia, which is a huge problem, just like everywhere tourist frequent, and she is welcome to help in that fight. But in one of her Facebook live videos, Miss Cleo Alabama told her male audience to come down to Gambia to get some women, and that they don’t even need to have “game”.  She further told them that they may have to clean them up because Gambia women are dirty. How does one claim to fight sex tourism from one side of your mouth and encourage other men to come down and get their sex on. Who does that? Miss Cleo Alabama.

To justify her insults, narrow mindedness, rude and obnoxious behavior towards Gambians, Miss Cleo Alabama continuously says that she is creating jobs. She also said this “if y’all don’t like my tone, FUCK YOU.” Creating jobs, no  matter how many, is not a green light to insult and degrade any group of people, especially the way Miss Cleo Alabama does it. She is vile and despicable. Different people from around the world, including Gambians, come to the United States and create employment for American citizens, but that does not give them the right to publicly insult Americans and everything American, given all the ills we all know about in the US. In fact, Americans will not even allow such BS! Miss Cleo Alabama talks about being broke and struggling in the US, and her attitude and behavior is that of a Hood Rat, and it’s manifested in all her videos. She is nasty and hyper dramatic! Miss Cleo Alabama is a Hood Rat who found herself “balling” in Gambia with a few dollars, after her long struggles in the US. With Gambia and Gambians open and welcoming, Miss Cleo now thinks she can insult and degrade Gambians, particularly Gambian women, because they docile and she’s there to take over. No amount of dollars is worth the demeaning insults Miss Cleo Alabama is spewing. In every country you go, regardless of how poor you think the people are, you should show respect. This is a universal rule! But of course, an ignoramus like Miss Cleo Alabama wouldn’t know that. If she had gone to India and do the same shit for instance, she will not last a day.

Gambia’s new “Hood Rat Master” is out of her mind and her attitude stinks from a hundred miles away. She thinks her head is wrapped nice and tight, but that’s only on the outside. She has a storm brewing inside and needs a savior herself. Here is another garbage that came  out of Miss Cleo Alabama’s mouth “we the diaspora blacks are more advance and are coming to take over.” I wonder who told the Hood Rat that she was speaking for anyone. The diaspora blacks I have interacted with will condemn her ass for such disparaging remarks! For someone who claims to be a Holistic Counselor, she is anything but whole. She is emotionally, psychologically and spiritually malnourished, and it’s apparent in her behavior. Miss Cleo Alabama is also an Urban Astrologer who is unable to predict that her diaper mouth will be challenged. As I watched her tell her audience about the good fortunes waiting for them in The Gambia, I kept waiting for the incense burners to start smoking and for the 1800 number to appear on the video screen. 1800 -ART-VILE. With Alabama being KKK Central, racism is raw there and unhidden, especially 40 years ago, and Miss Cleo Alabama probably had her share of demeaning remarks and insults just like a good number of blacks in the US, Africans included. So how does one then turn around and demean others? Especially a Holistic Counselor!

In conclusion, I am appealing to every proud Gambia to stand up and defend our dignity and show this eccentric Hood Rat that we are not going to stand by a watch her insult Gambia and everything Gambian. She needs to be smoked out and grabbed by the tail. Rather that inviting Madi Jobateh for questioning, the Hood Rat should have been invited by the authorities for questioning regarding her daily disparaging remarks about the country she is now “balling” at. She is boosting her social media presence by routinely degrading and insulting Gambia and Gambians and think it’s cute. She uses shock-jock tactics by making statements like “they sleep with the goats”. To her, having goats in your compound equals “sleeping with the goats”. Arna ngee dey “live” di hasteh ak sageh? Well, Cathey aka Miss Cleo Alabama aka Hood Rat aka New Master is abusing our welcoming nature by insulting our dignity with impunity. She has gotten too excited and now attacks everything Gambian. Are there problems in The Gambia? Of course! Just like the problems Miss Cleo Alabama has been tired of in the US which prompted her move to Mother Land. But one can speak the truth without being rude and disrespectful to Mother Land and your host!

Share
Facebook
Twitter
WhatsApp
Linkedin
Viber
Previous article‘He’s one of the frequent visitors here’: Police arrest again man nicknamed Ratty – as spokesman says he’s all the time involved in burgling
Next article17 health workers that had contact with nurse killed by coronavirus are pulled from public and put in quarantine