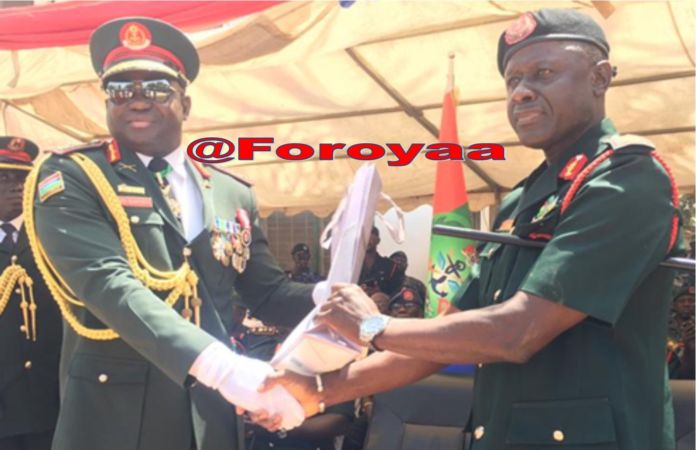 The Gambia Armed Forces said on Saturday gloves worn by Masanneh Kinteh as he handed over to his successor Yakuba Drammeh was not because of coronavirus.

Reports in recent days suggested the sacked former head of the army wore gloves to prevent himself from catching coronavirus.

The army through its spokesman Major Lamin Sanyang said in a statement on Saturday Mr Kinteh didn’t wear gloves because of COVID-19.

“The formal Handing and Taking Over of Office, Baton of Command and Pulling – Out ceremony was held on Tuesday 17 March in the form of a colorful parade with outgoing CDS, Lieutenant General Masanneh N Kinteh, dressed in ceremonial uniform with white hand gloves like all members of the parade. Lieutenant General Kinteh was dressed in this attire because the ceremony was about him and not a preventive measure by the outgoing CDS against the COVID-19 virus (as reported by some media outlets); the white gloves are part of the ceremonial dress in the military,” the army said.

The army’s new head Major General Yakuba Drammeh’s reign has not started off quite smoothly as he has been asked to self-isolate over coronavirus. He travelled in the same flight as the 28-year-old woman who earlier this week became the country’s first coronavirus case.

The army said of its new leader’s coronavirus self-isolation: “The Gambia Armed Forces wishes to state that Major General Yakuba A Drammeh had travelled on an official mission to France from 9 – 14 March 2020 together with another senior officer of the GAF. At the end of their mission General Drammeh together with others returned to The Gambia via Cassablanca, Morocco and arrived in Banjul early morning on Sunday 15 March 2020 onboard a Royal Air Maroc flight.

“All passengers on board the flight, including the CDS were screened at the airport upon arrival in line with laid down medical protocols and all were found to be negative with no signs and symptoms of the COVID – 19 virus.

“He was to, among other things, prepare for the formal Handing and Taking Over of office with his predecessor, Lieutenant General Masanneh N Kinteh on Tuesday 17 March 2020 at the Defence Headquarters in Banjul. The in-coming CDS was further tested on two different occasions by a qualified medical doctor after resuming office, all in bid to confirm his status as regards the pandemic, and all the tests results were negative.

“However, before close of business on Wednesday 18 March 2020, the Chief of Defence Staff, Major General Yakuba A Drammeh received an official from the Ministry of Health who informed the CDS that they had information suggesting that a 21 – year old Gambian lady from the United Kingdom who had reported to the Medical Research Council with signs and symptoms of the Corona Virus (COVID-19) and tested positive was, apparently or coincidentally, also on board the same flight with him as well as several other people. It has to be stressed that any other Gambian or non-Gambian could have been on board this flight either by circumstance or mere coincidence.

“The Chief of Defence Staff was then advised that, in accordance with WHO protocols on COVID – 19 virus prevention, all those on board the flight including him have to self-isolate themselves for a period of 14 days as a preventive measure. Without hesitation, Major General Drammeh complied with the advice and started the self-isolation immediately.”

Share
Facebook
Twitter
WhatsApp
Linkedin
Viber
Previous articleNearly one BILLION people are in lockdown across the globe as WHO warn young: ‘You are not invincible’
Next articlePresident Barrow closes airspace to all flights as he also shuts land borders with Senegal