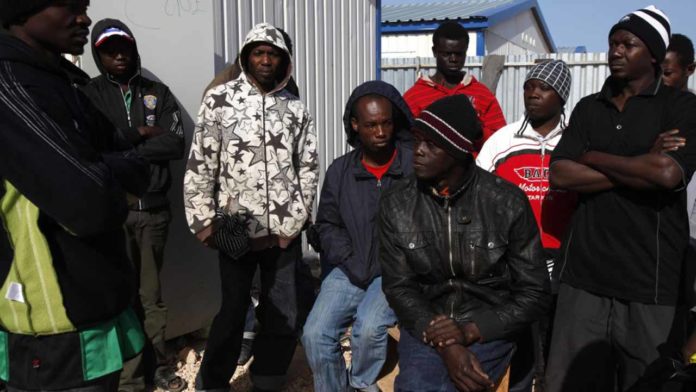 A group, Concern Gambians Against Deportation, will stage a march past on Thursday to protest against the deportation of Gambians from Europe.

The group in a statement signed by its spokesperson Omar Saibo Camara at the weekend said: “The general public is hereby informed that the Concerned Gambians will be organising a peaceful demonstration in The Gambia on Thursday, 7th March 2019 at West Field ground in the Kanifing Municipality. The demonstration will be organised in wake of the recent trend of deportation happening from Europe especially Germany.

“There will be a march past from Mobile Traffic Junction along Mamadi Maniyang Highway to the Youth Monument at West Field in the Kanifing Municipality.

“Recently, Germany has announced that the it will deport 2,500 Gambians and the mass deportation has started since last year December. Several efforts have been made to convince the Gambia government to engage the EU but nothing has been done. Enough is enough and we urge our government to stop the deportation now.

“Additionally, we demand that the European police stop maltreating our brothers and sisters who are being deported. The latest group of 20 deportees that arrived at the Banjul International Airport on Monday, February 25, 2019, were handcuffed and have their legs shackled from Germany to Gambia. This is totally wrong and is against human rights. We demand that the European police stop such heartless, wicked and racist act now. And we call on the Gambia government to address the harrassments and rights violation meted out on our people during the process of deportation.

“Upon arrival at the Banjul International Airport, the deportees were escorted by the police and Immigration officers to the old buildings at the airport to undress and release them from the chains and handcuffs that were put on them. The journalists who were present at the airport were denied access by our very own Gambian security (Police, Immigration and GCAA security at the airport) and they could not get clear pictures of the handcuffed deportees with their legs schackled in chains until they were freed. This is very shameful and is undone. We are no longer in the time of slave trade and we will not tolerate such anymore.

“Therefore we are appealing to all Gambians to join the demonstration in Banjul on Thursday, March 7, 2019 to put an end to this inhumane and unfair treatment.

“Free vehicles will be available at various locations such as Bakau, Sukuta, Tabokoto, Brikama, Tanji, Brufut, Gunjur, etc, to transport people who want to attend the demonstration.

“T-Shirts and banners will be available as well. Come out in your numbers and let’s demonstrate to stop this unjustified deportation.

“Finally, we have applied for permit to organize this demonstration and we are hopeful that it will be issued on Monday. Equally the police have promised to provide escort for the protesters on Thursday.”