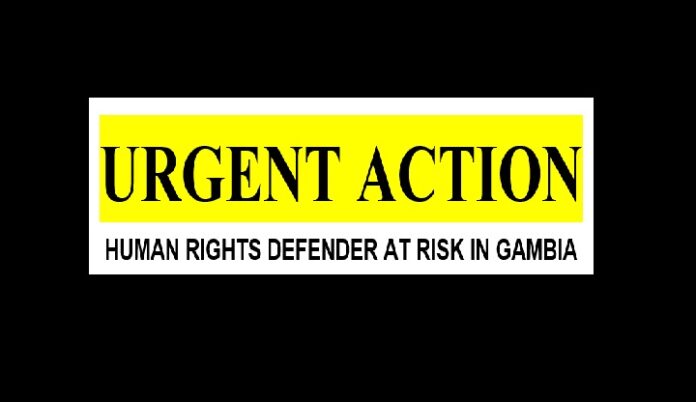 Rights group Amnesty International has written to President Adama Barrow raising concern about the safety and security of human rights defender Madi Jobarteh. The letter according to Ousmane Darbo, Media Manager at Amnesty’s West and Central Africa Office seeks to draw the state’s attention to a case of intimidation against Madi Jobarteh.

During his annual meeting with the Banjul Muslim Elders for Koriteh at the State House on 2nd May 2022, President Adama Barrow accused human rights defender Madi Jobarteh of being a “troublemaker” who wants to bring violence into the country.

It is believed that this assertion was made in relation to a recent social media post that Madi Jobarteh made calling for the removal of a government minister, due to alleged mismanagement of public lands.

Such statements by the President the group says put Madi Jobarteh’s safety at risk, and fundamentally undermine the right to freedom of expression in The Gambia.

“I am writing to you to express my grave concern for the safety of human rights defender Madi Jobarteh, following your televised statement on 2 May in front of Banjul Muslim Elders at the State House. It was alarming to see that during your speech, you accused Madi Jobarteh of being a “troublemaker” who wants to bring violence and burn down the country, and the media of being irresponsible for serving as a platform for Madi Jobarteh.

In a society guaranteeing human rights, including the right to freedom of expression, such baseless attacks and accusations against human rights defenders and the media raise serious concern,” the letter stated.

It further stated that the recent statement has not only stigmatised Madi Jobarteh’s peaceful activism but dangerously exacerbated the risks he faces in his personal and professional life, making him the target of threats, harassment and criminalization.

“As I am sure you will agree, human rights defenders play an essential role in standing up for freedom, opposing discrimination, repression, corruption and promoting social justice across West and Central Africa. Yet, instead of being celebrated, many face the risk of threats, harassment and physical violence by security forces and private actors.”

The letter went further to call on the state to among other things ensure the security of human rights defender Madi Jobarteh and ensure he can exercise his right to freedom of expression as guaranteed by the Gambian Constitution.

It is important to note that this is not the first time that Madi Jobarteh has faced harassment. On 30 June 2020, he was arrested and charged with false information and broadcasting under section 181A of the Criminal Code. On that occasion, he had stated during a Black Lives Matter protest he had organised that the government failed to investigate the killings of three Gambian citizens by police officers. The charges were dropped the following month.

After President Adama Barrow assumed power following the election in 2016, he vowed to carry out critical reforms to reverse the repression which characterised the government of former President Yahya Jammeh. Nearly five years later, despite some improvements, things have not changed as positively as expected, including the Gambia legislative landscape which has barely changed.

Although protection of the right to freedom of expression and other rights have improved since 2016, oppressive Jammeh era laws are still on the statute books such as some sections of the Information and Communications Act of 2009. These laws are still used to oppress human rights defenders, activists, journalists and civil society groups.