Ambition Denied: It Was An Electoral Avalanche of Monumental Proportions 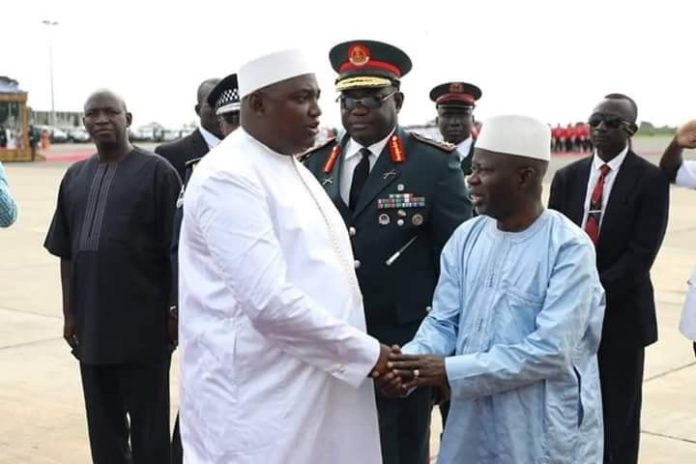 The Gambian president Adama Barrow, who won re-election made it seem so easy against his opponents, including his fiercest and former ‘’political god-father’’ Ousainou Darboe of the United Democratic Party (UDP).

The incumbency factor, colossally advantageous in electoral politics in Africa, gifted Barrow an inherent bastion from which to broaden his reach, amplify his voice and maximize his chances. He used the bully pulpit to undiminished lengths. He travelled around the country with the accompaniment of presidential regalia, aura and oomph. He spent oodles of money on commercials, placed in media both supportive and critical of him.

He deployed his two wives, the two first ladies, in the vote-aplenty areas of the West Coast and Kanifing Municipal Council (KMC). The two ladies, often dressed in colorful traditional attires sewn by local tailors, helped humanize their husband and made him come off as the head of a stable and harmonious household.

The incumbency factor was important in helping Barrow win re-election, but it wasn’t central to it. When a president facing re-election has a problem of perceived incompetency, like Barrow had, the advantages of incumbency become moot. They hardly sway the electoral pendulum to the other side. Consider:

Incumbent US presidents Jimmy Carter, George H. W. Bush and Donald Trump lost to Ronald Reagan and Bill Clinton and Joe Biden in 1984 and 1992 and 2020 respectively. Their incumbencies didn’t help them. Their incompetencies did them in.

Going into the 2021 presidential elections, Barrow’s biggest vulnerability was his incompetency in managing the knots and bolts of constituent matters: economic livelihood, healthcare, security, and education. Never mind that Barrow’s trusteeship of the new-found democratic dispensation had been near-perfect. Never mind also that he had built roads and bridges in the country.

The fact that Barrow made a hash of presidential leadership on the issues contiguous to the lives of the people, and all of this happening under a cloud of perceived corruption and indifference, the elections should have been about him, a referendum on his custodianship of the national affairs in the last five years.

About messengers, Mr Darboe was unquestionably the one with the perceived electoral heft to take the presidency away from Barrow. He had been trying to be president since 1996. And it sure looked like he had a chance this time around. But like a thief in the night, the Gambian presidency continues to be elusive to him. Perhaps, for good now.

It was the quirk of fate that Darboe, a lawyer by profession, would spend the twilight of his life as a politician. Perhaps, he hadn’t planned on it. He, the story goes, was invited to join and eventually head the newly-formed United Democratic Party in 1996 when the new military junta banned all of the existing political parties.

Very little in Darboe’s background had prepared him for a leap into politics. He came into it as an amateur. And 25 years later, he still remains an amateur. He hasn’t grow in it, deepening his understanding of politics, and building political capital over the years. Prior to his running for the presidency, Darboe had never run for elective office. Holding one would have given him some training in how to run a constituency, manage constituent matters, in how to build a disposition for dialogue and consensus with those on the other side of the political spectrum.

And in how to stay politically relevant. The UDP is a powerful entity in the National Assembly. It would have been more powerful if its leader had been in the legislative huddle with his colleagues. But Darboe operates outside of the deliberative process of governance, thereby undercutting his political clout as the leader of the largest party in the country. He is only relevant every five years when it’s the time to go to the polls.

As a candidate, Darboe came off as dour and tetchy, and beyond his rank and file supporters, he hardly excited anyone. He had a likability problem. For some reason, not many people warmed up to him. And voters tend to vote for people they like.

It was Darboe’s misfortune to run against Jammeh and Barrow, two opponents who had more likability. Jammeh, never mind his mean streak, had a great sense of humor and a pleasant folksiness that people liked about him. In Barrow, the voters saw the portait of an everyday Gambian they could relate to: his father is Mandinka and his mum is Fulani. And he speaks several Gambian languages.

Darboe’s political judgement was unremarkable. Consider: he should have resigned from the Barrow Administration rather than allowed being fired. And he saw it coming. He would have used his resignation as a winning argument during the campaign. He would have told the voters that he resigned on principle, that policy and ethical differences with the president had compelled him to part ways. This would have earned him some plaudits from the electorate.

Consider this, too: he shouldn’t have reminded the Serehule in the Upper River Region that they didn’t vote for Barrow in 2016. True, but why say it to them in spitefulness just because they were now huge supporters of the president? Darboe should have been trying to win those voters over to his side. But instead he infuriated the most powerful voting bloc in that region. And they punished him at the polls.

Throughout his 25-year political career as a politician and a presidential candidate, we barely knew what Darboe’s heartfelt feelings were with regards to where he wanted to take The Gambia. What was his vision? He never had one. If he did, it was mangled in delivery. Eloquence, a great asset for any successful politician, was a missing lacunae in Darboe’s political portfolio.

Darboe’s candidacy, and packaged for public consumption by his party, over the years, was a constant drumbeat about what he had “done” for the country as if a reward from the electorate were expected of it. His party always reminded us: Darboe “suffered for The Gambia.” But then who didn’t? He stood against the Jammeh dictatorship. Who didn’t? He went to prison. Who didn’t?

The struggle to bring back constitutionalism in The Gambia was carried in all fronts of civil society. But the UDP would have you believe that it single-handedly dismantled the Jammeh dictatorship. It is hubris, the self-perceived out-sized influence of a political party impervious to the dangers of inflated grandeur before the acquisition of power in a participatory democracy.

Political arrogance, exemplified by intimidatory tactics at voter registration centers and the stifling and boycotting of dissenting voices, tends to repulse voters. And they will let you know at the polls.

Tangentially, Darboe lost because he was one-dimensional. He didn’t grow politically. He didn’t expand his base. In fact, it shrunk with Barrow taking a good chunk of the party with him. Also, he didn’t have a sunny side to him that was observably present in his opponent. But on a broad canvass, Darboe lost because the election turned out to be a referendum on him and his party, a quicksand for any challenger facing an incumbent.

It was a disaster.