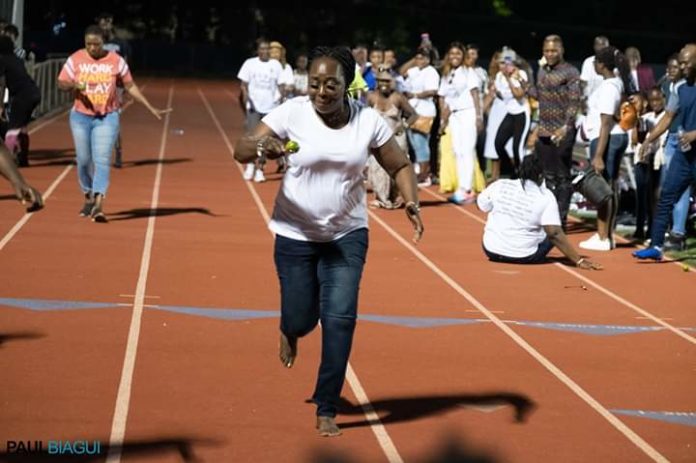 By Tijan Masanneh Ceesay, in Atlanta

Following Saturday night’s white and gold gala dinner and fundraiser on Saturday, Cobb County High School Sports arena outside the city of Atlanta was the host of the inter schools sports events.

For the first time, The Schools selection swept the trophy stand.

In the Fr. Joseph Gough Challenge Cup for football, the Schools selection defeated Saints Nation by four goals to two.

The coach for the Saints team, Mr. Michael Nicol said the loss has left a bitter taste in their mouths for they don’t know how to lose.

“We will regroup and trust me, next year all our former internationals will show up for the revenge game. They are not use to beating Saints so this is big for them.”

Nicol also added that it’s all in great fun, they love the rivalry and it really renews their long and strong bonds from childhood.

“At the end of the day, the mission and goals we have set for Gambian education are bigger.”

But for Kara Ceesay the goalkeeper for the All High Schools selection, “Saints never want to lose and you can’t win every day.”

“This one was to settle scores from all the trash talking over the last. They even sent last year’s trophy to the school in Gambia. So we are enjoying the moment.”

In the rounders game, Saints lost by eight runs to six. And in typical Saints fashion, the Organization’s Vice President, Yama Njie who played on the Saints team said: “we were cheated. They ran away after just one inning claiming victory but we will see them next year.”

Speaking for the Schools selection, Jojo Njie Ndow said they were going to celebrate this one. “We gave them a heavy dose of their own medicine,” she said.

In the track and field event, Saints Nation won.

Trophies, medals and certificates were presented to the winners and also the children who participated in the kids competitions.