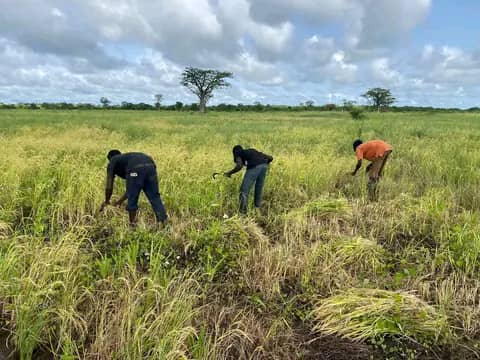 Driven by the zeal for food security, Mr Abubacarr A Bachilly, a Gambian who has been living in the diaspora has decided to return and engage in large-scale agricultural production by engaging more than 100 youths to provide manual labour.

This gigantic drive, according to him, is a calculated innovation to ensure that locals produce abundant food crops to drastically reduce dependency on imported food items which are not reliable.

The hiring of up to 100 people in the rice field is not only to bridge the youth unemployment gap but self-reliant venture.

Mr Bubacarr A. Batchilly is a Gambian-American who came back home about 6 years ago after over 30 years in the United States. Although Batchilly is involved in other businesses, including a content production company and a civil society organization jointly run by his wife, farming has always been a venture he wanted to get involved in since coming home.

“I was mostly inspired by the many farmers and women I have met over the years while filming documentaries for United Nations Agencies supporting Agriculture throughout The Gambian,” he explained.

Sahel Agribusiness is currently farming a total of 25 hectares of rice: 20 hectares in North Bank Region (Orylux 6, Sahel 177 and Nerica L19) and 5 hectares in Brikama Ba, Central River Region (Orylux 6 rice). Other products include groundnuts, sesame, watermelon and corn/maize, but the majority of the production is rice.

“My vision is to provide leading solutions to agricultural and agro-industrial production through technology and innovation while providing solutions for sustainable agribusiness by producing world-class products,” he added.

Mr Bachilly further said that success right now for him is being able to create employment for the women and youths in the communities he operates in.

“I have so far engaged over 100 women and youths to work on the farm, some full-time and some part-time and their contributions are what have motivated us to come this far. We are also grateful for the support received from the Rice Value Chain Transformation project (RVCTP) which provided us with certified seedlings and other logistical support,” he said.

According to him, the rice value chain transformation project provides him with Over 80 bags of certified rice seeds, 30 orylux, 2 bags of Sahel 177 and 48 nerica L19. “We also received 22 bags of Urea and 5 gas bombs. They also provided relevant technical advice and direction.”

This initiative by Mr Bachilly is a major step towards the country’s drive for food self-sufficiency. The Gambia currently depends on imported food items as homegrown food crops are insufficient to tee the nation. Large-scale rice production by the private sector could minimize the burden to some degree.