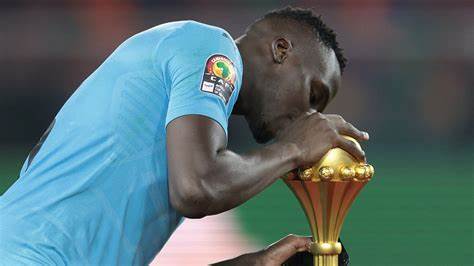 Edouard Mendy received a warm welcome from his Chelsea teammates after winning the 2021 Africa Cup of Nations with Senegal.

During the penalty shootout against Egypt at the Olembe Stadium in Yaounde, the goalkeeper saved Mohanad Lasheen’s kick as the Lions of Teranga went on to triumph 4-2.

And Mendy was enthusiastically received by his Blues team-mates on Wednesday as Chelsea prepare for their Fifa Club World Cup fixture on Wednesday evening.

The former Rennes man was applauded by the squad and staff, who formed a guard of honour, as he arrived at the team’s camp in Abu Dhabi.

The Stamford Bridge giants square up against Saudi Arabia side Al Hilal in the semi-final billed for the Mohammed bin Zayed Stadium before either playing a final or third-place play-off three days later.

Meanwhile, Chelsea coach Zsolt Low stated that it won’t be easy for the African goalkeeper to displace Kepa Arrizabalaga currently.

“We have to check him, we have to talk to him. We will see in a few days whether there is a possibility he plays,” Low told the media per Chelsea website.

“This is a good situation for the coaches where we have two amazing goalkeepers. Mendy did a fantastic performance, he won the Africa Cup, and was the best goalkeeper at the tournament.

“Kepa has done an amazing job and in the last game saved a very important penalty. He is also in very good shape.

“For sure when Mendy arrives we will have talks, also with the goalkeeper coaches, and we will take a decision afterwards.”

When asked about the incredible scenes in Dakar as Senegal revelled in their maiden Afcon triumph, Low added:

“We were very happy for Mendy. This is a very important thing for him and for all African players, to win the Africa Cup.

“He did an amazing performance. It was very important to celebrate with his teammates, and with his country. It was a nice celebration!”

Mendy was lured from Ligue 1 outfit Rennes in a £22m ($31m) deal as the six-time English top-flight kings sought to find greater stability between the sticks as costly errors had crept into Kepa game.

Appreciatively, he has since proven to be one of the bargain signings, helping the London side emerge as European champions.