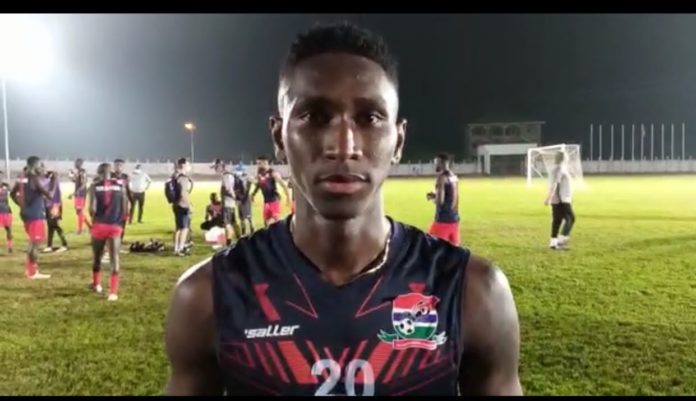 In what appears to be the most anticipated moment in Gambia’s football history the Scorpions have vowed to set a record in Cameroon in their median game against Mauritania at Limbe Stadium on Wednesday.

The Scorpions left the shores of The Gambia on Friday to participate in the AFCON, bringing joy to many Gambians. The team began training on Saturday 8 January 2022.

Omar Colley, Gambian defender and assistant team captain expressed the team’s readiness to fully take part in the competition. He assured Gambians that they will surprise their opponents, noting that they will give it their best to raise the country’s flag to the highest level.

“We are ready both physically and mentally to represent our country in the competition. We will fight for our country. Playing in the AFCON is a dream come true for me and the entire team,” Omar Colley said.

“The fans support in Douala is part of the motivation and that is enough to keep us going. We are really happy. We came here without knowing that we will find such a welcome in Douala.”

He called on Gambians to continue their support while pointing out that this is what the country has been working to achieve for many years.  Adding that the team is excited about the warm welcome accorded them by Gambians residing in Cameroon.

Babucarr Trawally in a joyous mood called on Gambians to believe in the team and pray for them to achieve their ultimate goals in Cameroon.

“Everyone is ready and motivated to take part in the median competition. “Am urging Gambians to keep praying and supporting us,” Babucarr Trawally said. “Even though most of them are not with us but their support back home will take us further in this competition.”

For Modou Barrow, a Gambian Forward player, taking part in the competition is what they have been yearning for over the years.

“The feeling of taking part in the competition is good and we are excited,” Modou Barrow said. “We are all looking forward to the AFCON, we have been fighting for many years, now we are in the competition, we will do all it takes to go further. We will surprise the world by showing them what we can do.”

He further noted that they will surprise bigger nations as they are set to battle with Mauritania on Wednesday at Limbe Stadium in Cameroon.

On his part, Lamin Kaba Bajo, President of The Gambia Football Federation (GFF) expressed hope that the scorpions will set a record in the competition while appealing to Gambians to continue supporting them.

“It’s not only participating in the competition, but we also want to go home with respectable results,” GFF President Lamin Kaba Bajo said. “I trust the boys so much and I know they can do it. I call on Gambians to keep supporting them.”

He also thanked the government of The Gambia for supporting the national team adding that the median game is very significant in the history of the nation.

Ebou Faye, second Vice President of The Gambia Football Federation (GFF) and others are also optimistic that the Scorpions are in the right direction to face any team in the competition. This marks the 33 African Cup of Nations and it is featuring 24 different African Countries.