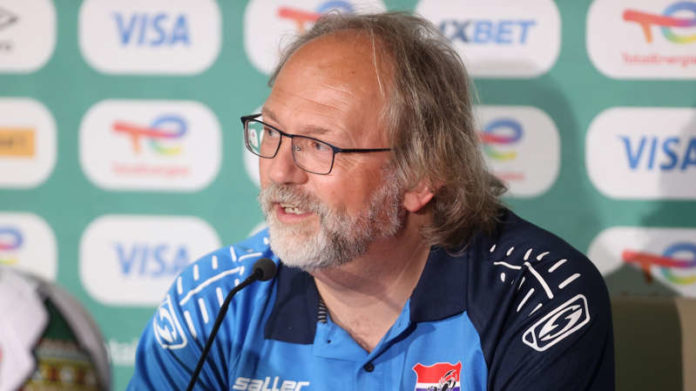 Africa Cup of Nations hosts Cameroon step into a potential minefield at Japoma Stadium when they clash against debutants Gambia in a quarter-final encounter on Saturday.

After making hard work in a 2-1 Round of 16 win over Comoros who played 83 minutes with 10 men and had a makeshift goalkeeper, Cameroon might have had a lot to reflect on, going into Saturday’s match.

They now face another debutant in Gambia who have developed a knack of causing upsets in this tournament. That Tom Saintfiet’s men stunned Tunisia 1-0 in their last group game, before eliminating perennial contestants Guinea in the last 16, means this would not be an easy game.

Gambia coach Saintfiet will have to plan without suspended Boavista forward Yusupha Njie who was sent off against Guinea after being on the pitch for 15 minutes following his introduction in the 72nd minute.

Midfielder Ablie Jallow is doubtful for this match after he limped off in their last assignment against Guinea just after the hour mark. There are also fitness concerns on defender Noah Sonko-Sundberg who missed the Guinea match.

But after some valiant defending against Guinea, the Scorpions might be worrying too much over Sonko-Sundberg. No injuries or Covid-19 cases have been confirmed from the Indomitable Lions camp.

Captain Vincent Aboubakar who is the tournament’s top goalscorer with six goals from four matches would be keen to keep up with his terrific form. Toni Conceicao’s men are three games away from conquering the continent for the sixth time.

Gambia and Cameroon are meeting for the first time ever in this competition.

Both teams are so far unbeaten in this tournament and have scored in each of their matches although Cameroon have scored five more goals than Gambia.

The Scorpions could be drawing inspiration from South Africa who became the first debutants to reach the Afcon semi-finals in 1996 and went on to be crowned champions.

Having progressed from two of their last three Afcon quarter-final appearances, Cameroon have, in the current squad, a number of players who helped them achieve that on their way to claiming the 2017 title.