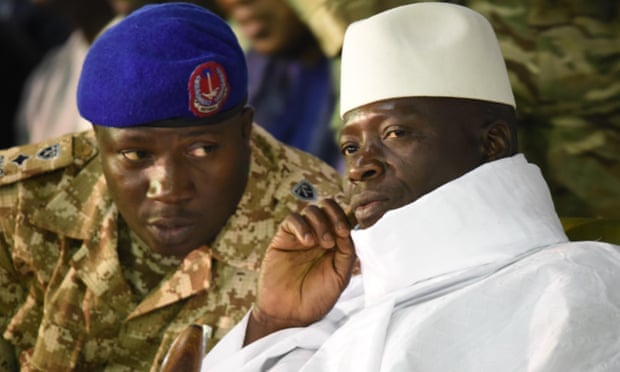 A consortium of investigative reporters, Organised Crime and Corruption Reporting Project (OCCRP), in a serialised report titled, ‘The Great Gambia Heist,’ and published on March 27 bared how Jammeh and his associates plundered nearly 50 billion dalasis of ‘timber resources and Gambia’s public funds’.

On Friday, the Janneh Commission an investigation set up by President Adama Barrow to peep into the financial, assets and business dealings of the former president finally presented a 1,600-page report to President Barrow.

At the event, Justice Minister Tambadou disclosed that Jammeh was an egotistic megalomaniac who used billions of dalasis of state money to satisfy his ‘pretentious and delusional lifestyle.’

The Janneh Commission investigation spanned 18 months during which it sifted through thousands of transcripts of 253 witness testimonies and other documentary evidence.

Mr Tambadou said the commission’s report “exposed former President Jammeh’s financial activities ranging from complex webs of intricate and sophisticated international financial transactions that bear all the hallmarks of criminality and money laundering in particular aided by his close associates, to shameless acts of brazen outright thievery at the Central Bank of The Gambia.”

“We have exposed the alarming scale of corruption of the former president and his close associates.
“We have now established that he claimed title to 281 landed properties in the country;

“We have shared information generated in the course of the commission’s work with foreign governments that are assisting us with the tracking and recovery of assets abroad and which led to the freezing of the Potmac residence by US authorities;

“And we have seen a tightening of financial regulations by government departments and agencies to prevent corruption and financial leakages in the system.”