A fate uncertain: the draft constitution in the National assembly 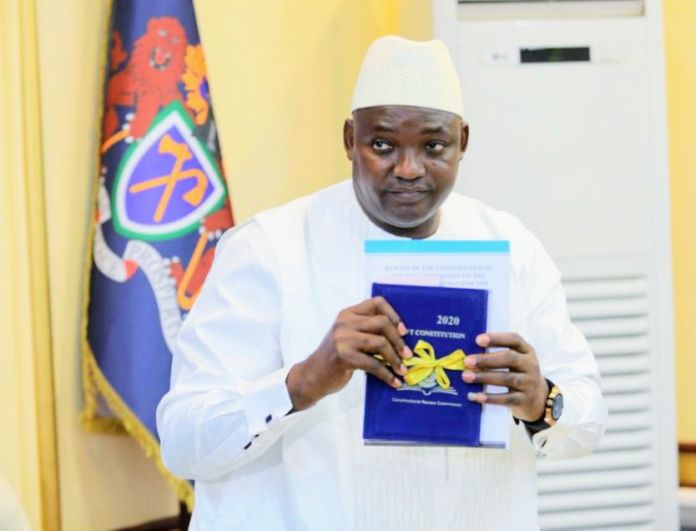 Ostensibly he appointed the Constitutional Review Commission (CRC) and it was to him the Commission submitted its Draft Constitution (the Draft) on 30 March 2020. He can neither delete nor add a word to the Draft. Absent at the point of conception, and with obviously no role as mother or father, His Excellency President Adama Barrow is restricted to the function of midwife between the CRC and the ratifying authorities, i.e., the National Assembly, and the people through the mechanism of a referendum. If the Draft passed both stages, he must assent.

When the country liberated itself from totalitarian excess routinely manifested in executive vandalism including through dubious ‘lawful’ channels, there was no serious debate that the nation needed a brand new framework document, a document stripped of the internal violence to democratic government and separation of power that pervades the structure of the 1997 Constitution of the Republic of The Gambia (the Constitution).

That systemic flaw notwithstanding, it is unsound to argue that any replacement of the Constitution, regardless of blatant mediocrity, is good to go. The question of whether the CRC struck the proper balance around the structure of government, and between that structure and the people via the fundamental freedoms is a live one but with the Draft so heavily plagiarised from Kenya’s 2010 Constitution, and packed with clearly non-constitutional provisions, the jury is out on whether this document can be supported through the various stages of the ratification process.

A more unforgivable sin is the sheer prescriptive detail of this Draft.

In his seminal work, “Make No Law: the Sullivan Case and the First Amendment”, Anthony Lewis, the distinguished former legal correspondent of the New York Times submits: “Those who framed the Constitution and its most important amendments used spacious phrases … The Framers laid down principles rather that specifics, and they surely did so intentionally. They chose to avoid binding the future with a code of precise instructions. They understood that precision is the enemy of permanence. Detailed rules, which necessarily reflect the limited vision of any age, become obsolete as circumstances change. A rigidly detailed constitution would not last, so the framers gave us values to protect, in bold strokes: “no law … abridging the freedom of speech”. They wrote a document whose grandly phrased provisions can be interpreted, faithfully, to deal with new circumstances. Writing in 1819, Chief Justice Marshall put it that the Constitution was “intended to endure for ages to come, and, consequently, to be adapted to the various crises of human affairs”. The Constitution remains our fundamental law because great judges have read it in that spirit”.

Added to the Draft’s prescriptive nature are some serious inconsistencies between provisions of critical importance. For example, is independent candidacy explicitly permitted or are public elections the exclusive preserve of political parties? This is a live question of great significance.

In any case, as midwife, the Executive must now travel the document and its Bill to the Solons of the Republic in line with the stipulations of several laws including the Constitution.

Section 226 (1) of the Constitution permit its alteration by “an Act of the National Assembly”. Delineating that alteration process, section 226 (8) states: “No act of the National Assembly shall be deemed to amend, add to, repeal or in any way alter any of the provisions of this Constitution unless the title of the Act clearly indicates that intention and the Act does so in express terms”. Section 226 (9) drives home the point!

In the Legislature, the Draft must be supported by no less than 43 National Assembly Members (NAMs). Stated differently, a mere 16 NAMs voting against the Draft is enough to permanently sink and prevent it from reaching the people through the referendum stage of ratification.

Notwithstanding its laudable proposal for independent agencies, the Draft’s volume interferes with internal coherence and is of dubious compliance with the rule of law.

It is my contention that Gambia must move away from the prescriptive form of constitutional engineering, a task achievable only through shedding the excess fat in the Draft. We must create a constitution grounded in “principles rather that specifics”, and this “to avoid binding the future with a code of precise instructions” for precision, undoubtedly, “is the enemy of permanence. Detailed rules, which necessarily reflect the limited vision of any age, become obsolete as circumstances change”.

There are universal values a democratic constitution must protect but this Draft is way short of the minimum standards a document like a national constitution must acquire to pass the requisite test of balance and neutrality, a document, so to speak, that can serve as a fitting legacy for posterity.

Subsequent contributions shall deal with specific queries against this heavily plagiarised Draft.

I shall not be joining the caravan for a “yes” campaign!

The writer, Lamin J. Darbo, is the founder of Dabanani Law Centre in Sukuta.